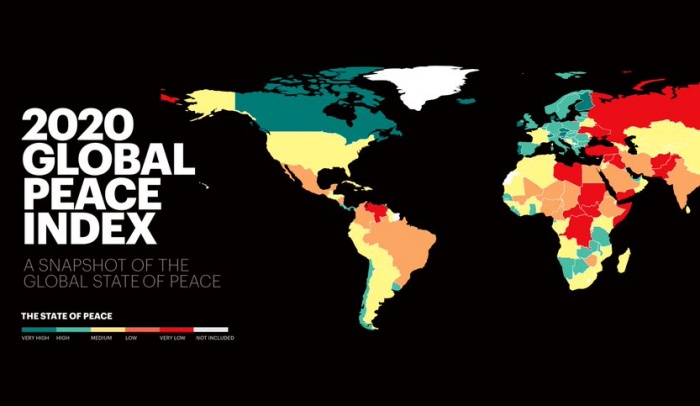 Turkey was named 150th out of 163 countries around the world in the latest edition of the Global Peace Index, a report measuring the level of peacefulness of countries.

Turkey is the only European country to be ranked in the 25 least peaceful countries.

The peace index has been annually released for the last 14 years by the Institute for Economics & Peace (IEP), an independent, non-partisan, non-profit think tank.

Turkey’s level of peacefulness has been deteriorating since 2012, when it was ranked 132nd.

Twenty-three qualitative and quantitative indicators measure the state of peace across three domains, which are “the level of societal safety and security,” “the extent of ongoing domestic and international conflict” and the “degree of militarization.” Countries that scored lower on each indicator are considered to be more peaceful.

Major findings of this year’s report reveal that the level of global peacefulness has deteriorated, with the average country score falling by 0.34 percent. According to the IEP, this was the ninth deterioration in peacefulness in the last 12 years, with 81 countries improving and 80 recording deteriorations over the past year.

Iceland remains the most peaceful country in the world, a position it has held since 2008. It was followed this year by New Zealand, Portugal, Austria, Denmark, Canada, Singapore, Czech Republic, Japan and Switzerland, which make the top 10 peaceful states among 163 countries.

According to the index, Afghanistan is the least peaceful country in the world for the second year in a row, followed by Syria, Iraq, South Sudan and Yemen.

In terms of ongoing domestic and international conflict domain Turkey is the 10th least peaceful state, followed by Somalia, Libya and South Sudan.

When it comes to the societal safety and security domain, Turkey is the 16th from the bottom of the list.

According to the report the driving forces behind the worsening of peacefulness in Turkey are the refugee crisis on the Greek border and President Recep Tayyip Erdoğan’s continuing oppression targeting political dissent.