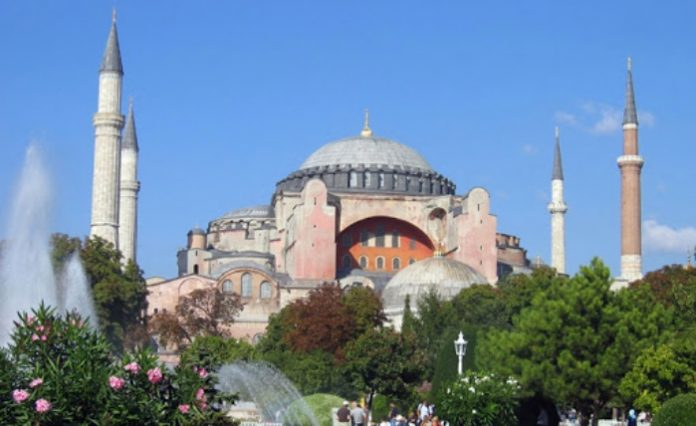 Turkish President Recep Tayyip Erdoğan has said he is waiting for a decision from the Council of State regarding the conversion of the historic Hagia Sophia museum to a mosque, saying the government will take the necessary steps if the court decides in its favor.

Speaking on a live TV program late Monday, Erdoğan rebuffed Greek officials who opposed the change to Hagia Sophia’s status, claiming it was a domestic issue.

“Are you or we governing Turkey,” Erdoğan said, referring to a Greek Foreign Ministry statement.

The museum status was bestowed by a Turkish cabinet decree in 1934.

As President Erdoğan and his government officials have adopted a more Islamic tone since a 2016 coup attempt, the status of Hagia Sophia, a symbol of the conquest of İstanbul by the Ottomans, has been open to debate.

On May 29, the anniversary of İstanbul’s conquest, the government organized a recital of the Quran, the Muslims holy book, in the museum garden.

“Reading of passages from the Quran inside Hagia Sophia, a global monument protected by UNESCO as a world heritage site that has functioned as a museum since 1935, is not only an unacceptable attempt to alter the site’s designation as monument, but also an affront to the religious sentiment of Christians throughout the world,” the Greek Foreign Ministry’s May 31 statement said.

Meanwhile, on Tuesday the İYİ (Good) Party submitted a bill to parliament to convert the museum into a mosque; however, it was rejected by Erdoğan’s ruling Justice and Development Party (AKP).

An AKP official told reporters that they would wait for the verdict from the Council of State.

The 10th Chamber of the Council of State last year revoked a government decree changing the status of the Kariye (Chora) Mosque to a museum in 1945.

Kariye was also built as a church before the conquest of İstanbul by the Ottomans and then was converted to a mosque. Since 1945 it had served as a museum.