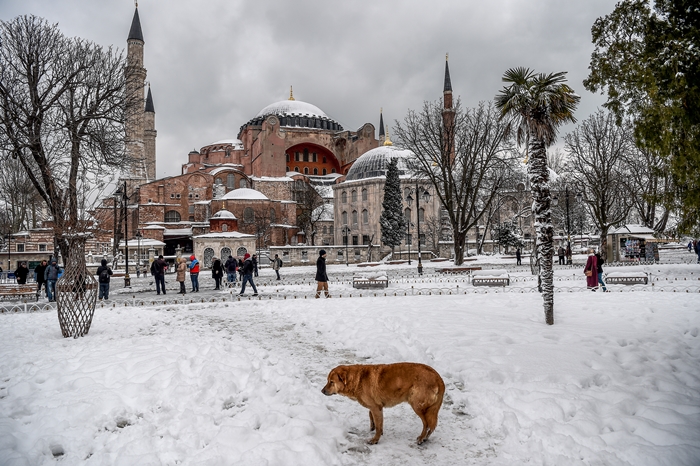 The Greek Foreign Ministry has slammed Turkey over the recitation of verses of the Quran at Hagia Sophia on the anniversary of the fall of İstanbul, describing the move as an “unacceptable attempt to alter the site’s designation as a monument,” the Greek newspaper Kathimerini reported.

“Today’s [Friday’s] reading of passages from the Quran inside Hagia Sophia, a global monument protected by UNESCO as a world heritage site that has functioned as a museum since 1935, is not only an unacceptable attempt to alter the site’s designation as monument, but also an affront to the religious sentiment of Christians throughout the world,” the Greek Foreign Ministry statement said.

On Friday Turkey marked the 567th anniversary of the conquest of İstanbul. As part of the celebrations, verses from the Quran were recited at Hagia Sophia, and Turkish President Recep Tayyip Erdoğan, who attended the celebrations via teleconference, said recitation of the Quran and the reading of prayers at Hagia Sophia were very important on the anniversary of the conquest of İstanbul.

However, the Greek ministry statement said: “This action is an insult to the international community and once again exposes Turkey, which has an obligation to respect both the Convention Concerning the Protection of the World Cultural and Natural Heritage and UNESCO, of which it is a member.”

“We once again call on Turkey to respect its international obligations and stop putting domestic expediencies ahead of its very privileged role as guardian of a monument as important as Hagia Sophia, which belongs to all of humanity,” it added.

Built in 537 by Byzantine Emperor Justinian, whose rule stretched from Spain to the Middle East, Hagia Sophia — meaning “Divine Wisdom” in Greek — was unrivaled in the Christian world until Ottoman Sultan Mehmet II conquered the city in 1453 and turned it into a mosque. Mustafa Kemal Atatürk, the founder of modern Turkey, decreed it a museum in 1935.