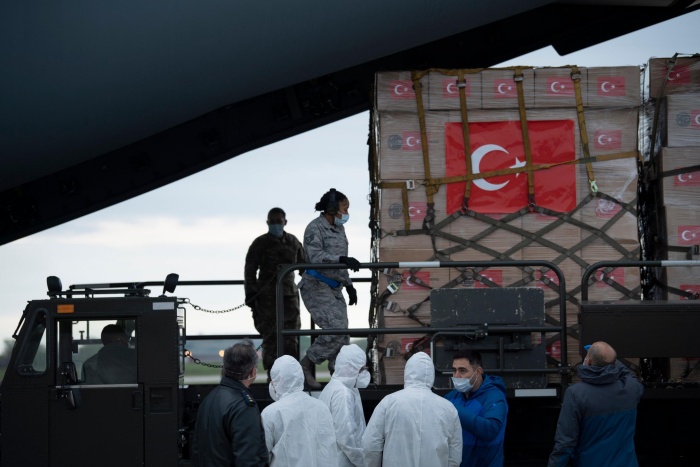 Emblazoned with Turkish flags and presidential seals, crates packed with medical equipment are loaded onto planes, part of a major aid campaign by Ankara, which has dispatched supplies to dozens of countries since the new coronavirus pandemic erupted, Reuters reported.

“There is hope after despair and many suns after darkness,” says a message on every shipment — a line from 13th century Sufi poet Jalaluddin Rumi, which looks to better days not just in the battle against COVID-19 but also for Turkey’s fraught diplomacy.

With its relations with NATO allies in Europe and the United States darkened by disputes over a Russian missile defense system, human rights and Western sanctions on Iran, Turkey hopes the virus crisis is an opportunity to soothe recent tensions.

Despite battling one of the world’s biggest coronavirus outbreaks at home — where the death toll now exceeds 3,700 — Turkey has sent medical aid to 61 countries, including the United States, Spain, Italy, France and Britain.

By its own calculations, Ankara has been the world’s third biggest aid distributor during the outbreak, sending face masks, protective suits, testing kits, disinfectant and respirators.

In a letter to President Donald Trump sent with one shipment, President Recep Tayyip Erdoğan said he hoped the “spirit of solidarity” Turkey had shown would help US politicians “better understand the strategic importance of our relations.”

Ankara faces potential US sanctions over its purchase of a Russian S-400 missile system, which it bought last year but has not yet fully deployed. Despite the threat of sanctions, it says the system will ultimately be activated.

On Saturday Erdoğan also called on the European Union to increase its cooperation with Turkey in light of the support Ankara provided member states during the outbreak. “I hope the EU now understands that we are all in the same boat,” he said.

Turkey remains a candidate for EU membership, but the process has long stalled amid disputes over Turkey’s human rights record, the handling of Syrian refugees and gas exploration around Cyprus and the eastern Mediterranean.

Turkish aid shipments were also sent to Libya, Iraq, Iran, the Palestinian Authority, Russia, the Balkans and to China, where the new coronavirus first emerged.

Turkey says it has also sent aid to Israel, despite tensions over Israeli settlement building in the West Bank and the status of Jerusalem. Both sides expelled their top diplomats in 2018.

Turkey has sent aid to 15 countries in Africa, where it is seeking to expand influence and commercial ties.

Not all aid shipments have gone smoothly. A commercial shipment of ventilators to Spain was delayed over export licenses. Another commercial shipment of 400,000 protective suits to Britain was criticized after some failed quality checks, but both Ankara and London said that was not a government-to-government shipment and that there had been no problem with aid sent directly by Turkey.