While the central bank acknowledged the depreciating currency, which has tumbled 15 percent this year, it stressed the need to keep credit flowing and to respond to sliding oil prices as it once again cut interest rates by 100 basis points.

Marking its eighth straight rate cut, Turkey’s central bank lowered its benchmark one-week repo rate from 9.75 percent, extending an aggressive easing cycle that has seen it fall 1,525 basis points in less than a year, beyond most analyst forecasts.

The lira hit its weakest level since August 2018 — at the peak of Turkey’s currency crisis — reaching 6.999 to the dollar, or around 0.25 percent weaker on the day.

While a weaker lira increases inflation in import-dependent Turkey, the currency has outperformed most emerging markets this year.

Turkey, the largest economy in the Middle East, is tilting into its second recession in less than two years after a surge in cases of the coronavirus. Ankara has moved to curb its spread by closing schools, bars and cafes, as well as shutting borders and limiting domestic travel. 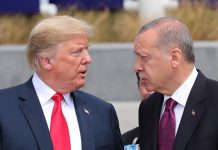