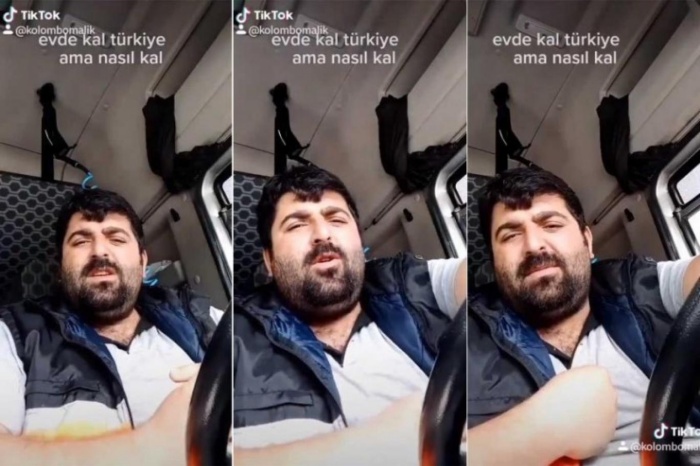 A Turkish truck driver was briefly detained over his video criticism of the government for calling on people to stay at home due to the coronavirus pandemic while presenting them with no solutions to the financial problems that will stem from an inability to work, according to Turkish media reports.

The truck driver, Malik Baran Yılmaz, says in the video posted on TikTok, a video-sharing social networking service that has millions of followers in Turkey: “Stay at home, Turkey. How can we do that, father? I am not a retired person, a civil servant or a rich man. I am a worker, a truck driver. When I don’t work, there is no food. I can’t pay my rent and my bills. Failing to pay them is actually worse than death. It doesn’t matter — either I stay home and die of hunger or because of the virus. This virus won’t kill me, but your style of administration [will].”

Yılmaz’s video also went viral on other social media platforms such as Twitter. Many said he expressed the feelings of millions who desperately need to go out to work.

Despite calls from Turkish society to impose a curfew, the Turkish government refuses to do so, leading to fears that the number of the COVID-19 cases will skyrocket. Many criticize the government for failing to provide its citizens with the necessary financial means to cope with the pandemic.

Yılmaz was detained by police at his house in the southern Turkish city of İskenderun on Sunday morning. A statement issued by the Hatay provincial police department said he was detained on charges of inciting public disobedience.

Yılmaz was released from detention later in the day. The death toll in Turkey due to the coronavirus jumped by 23 to 131 on Sunday, while the number of confirmed cases has surged to 9,217 since the first case was reported on March 11.