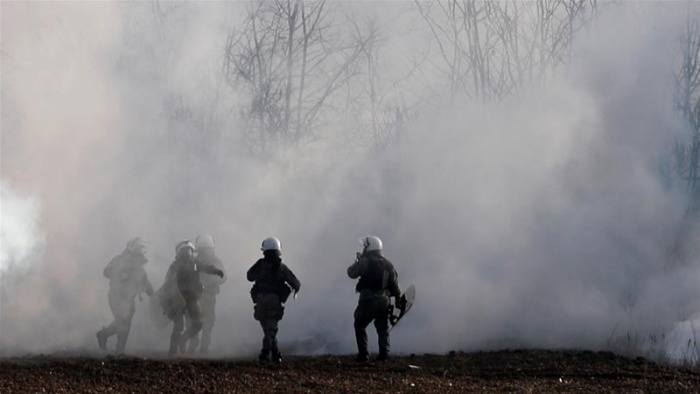 Clashes broke out on Greece’s border with Turkey before dawn on Wednesday after about 500 migrants attempted to break down a border fence and enter Greece, The Associated Press reported.

Greek police said they used tear gas to repel the push south of the Kastanies border crossing. They said Turkish authorities also fired tear gas at the Greek border. The clashes began at 2 a.m. and lasted for roughly two hours.

An estimated 2,000 migrants are still camped out on the Greek-Turkish border, weeks after Turkey declared its borders to Europe open and encouraged migrants and refugees living in the country to try crossing into European Union member Greece.

Tens of thousands of people headed to the frontier despite Greece’s insistence that its eastern border, which is also the EU’s external border, was shut. The move came after months of threats by Turkish President Recep Tayyip Erdoğan that he would allow millions of refugees into Europe unless the EU provided more support for refugee care in Turkey.

The EU says it is adhering to a 2016 deal with Turkey under which it provides billions of euros in funds in return for Turkey caring for more than 3.5 million refugees from neighboring Syria.

The violence on the border came hours after Erdoğan held a four-way video conference with the leaders of France, Germany and Britain to discuss the migrants crisis.

The violence at the Greek-Turkish border has added to concerns in Athens over the high number of migrant arrivals from Turkey — at a rough average of 100 per day on the Greek islands so far this year — adding to severe overcrowding at refugee camps there.

Greek authorities on Wednesday imposed movement restrictions, lasting for at least one month, at the island camps as part of public safety measures for the coronavirus pandemic.

Migrants on Lesbos and four other islands will only be allowed to visit towns on the islands in small groups and for limited periods, the Migration Affairs Ministry said. The ministry said it was also speeding up plans to build detention facilities on the islands.

No infections have been confirmed at any of the camps, though the extent of testing at those sites remains unclear.

More than 9,300 people have reached Greece — mostly arriving on the eastern islands — from Turkey so far this year, although the rate has slowed over the past week.