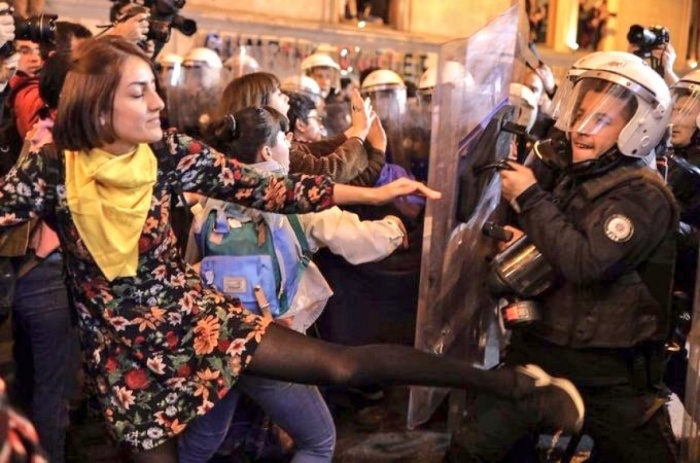 Turkish police fired tear gas and plastic bullets to break up a crowd of several thousand women who gathered in central İstanbul on Sunday evening for a march to celebrate International Women’s Day, according to Turkish media reports.

The crowd gathered at the edge of the city’s Taksim Square, planning to hold a march although the İstanbul Governor’s Office had earlier banned demonstrations and marches on İstiklal Street, where police teams set up barricades earlier in the day.

It is the second year in a row that the governor’s office has refused permission for organizers to hold the annual rally in the Taksim area.

Hundreds of riot police blocked the women’s path to prevent them from advancing along the district’s main pedestrian avenue for the 18th “Feminist Night March,” held in İstanbul since 2003 to mark women’s day.

Police fired pepper spray and pellets containing tear gas to disperse the crowd, and scuffles broke out as they pursued the women into side streets off the avenue.

It was not immediately clear if anyone was hurt, but dozens of women were detained, according to the early reports.

According to a recent report drafted by opposition deputy Sezgin Tanrıkulu, violence against women has dramatically increased since the Justice and Development Party (AKP) came to power in 2002, and at least 15,557 women have been murdered in the country since then.

Women’s rights organizations have for years been trying to raise awareness about the rise in violence against women that has taken place in the last 18 years. Many think that it is linked to the policies and rhetoric of the AKP, which has its roots in political Islam.