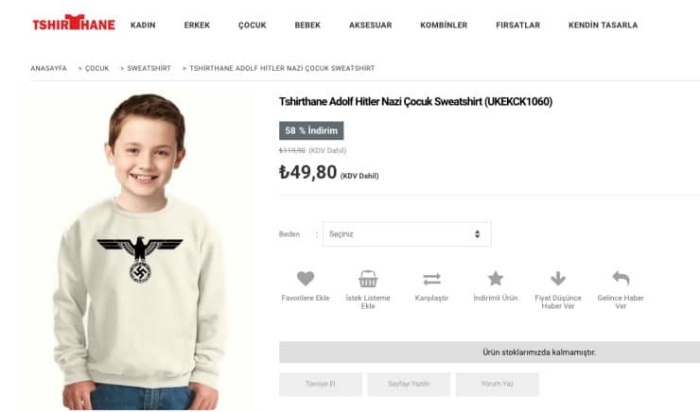 A number of Turkish e-commerce clothing websites briefly offered for sale a sweatshirt for boys bearing a Nazi symbol, according to Turkish media.

The “Adolf Hitler Nazi Boys Sweatshirt,” priced at around TL 50 ($8), was briefly for sale on popular e-commerce websites such as Trendyol, hepsiburada.com and gittigidiyor.com.

After outrage erupted on social media, the sites canceled sales of the product.

“We immediately halted the sale of the product,” Trendyol said in a statement on Tuesday, thanking its users for the warning. Other websites also put statements on their home pages, apologizing for the incident.

Use of Nazi symbols and anti-Semitic writing is increasing around the world including in Turkey, as Internet trolls have found a target audience on online platforms.

Some social media users highlighted that Hitler’s book, “Mein Kampf” (My Struggle), which was published by dozens of publishing houses in Turkey, has been quite popular on online book selling platforms lately and that existing versions usually lack any critical foreword or footnotes.