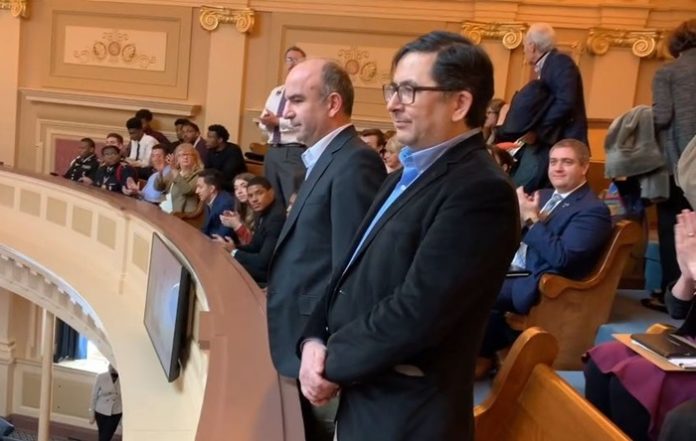 The Virginia House of Delegates welcomed two Turkish journalists in exile, Abdülhamit Bilici and Adem Yavuz Arslan, after Delegate Mark Sickles gave a one-minute speech on the lack of press freedom in Turkey.

Bilici, the former editor-in-chief of the Zaman newspaper, which was seized by the Turkish government in March 2016, and Arslan, the former Washington correspondent for the now-closed Bugün daily, have been living in the US since a failed coup in Turkey in 2016.

“I rise today to introduce my friends and some brave citizens from the American-Turkish Friendship Association who live in Fairfax County. These fearless men and women are originally from Turkey and are part of the exiled, investigated and stateless journalists and reporters and media workers from Turkey in the diaspora,” Sickles said according to video footage posted on Twitter by the TR724 news website.

“President Erdoğan of Turkey ordered a purge against civil society members after a failed coup attempt resulting the dismissal, detention and arrest of more than 650,000 people including academics, judges, businessmen, journalists,” he added.

Following his speech the other delegates in attendance gave a round of applause to Bilici and Arslan.

Declining freedom of press in Turkey has drawn serious criticism from Western allies, especially Washington, since the 2016 coup attempt, following which dozens of media outlets were shut down and more than 200 journalists were jailed.