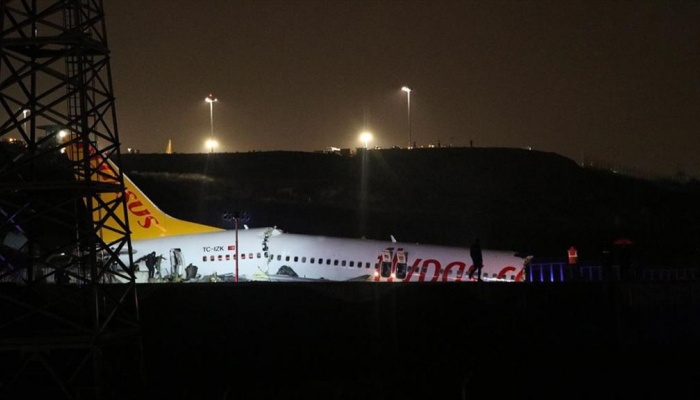 A Turkish court on Monday ordered the arrest of the pilot of a plane that crashed at an İstanbul airport, killing three passengers, on charges of involuntary manslaughter and causing injury, The Associated Press reported, citing local media.

The Pegasus Airlines Boeing 737 ran off the runway, crashed into a ditch and broke apart while landing in bad weather at Istanbul’s Sabiha Gökçen Airport on Feb. 5. Some 180 passengers and crew members were injured in the crash that saw passengers scramble through the split fuselage to escape.

The state-run Anadolu news agency said prosecutors investigating the crash interrogated the pilot, Mahmut Arslan, following his discharge from the hospital where he had been treated.

Prosecutors had previously taken statements from air traffic control staff, airport employees and the pilots of two other planes that aborted landings shortly before the Pegasus flight landed.

The crash happened as the 11-year-old aircraft landed in strong winds and heavy rain. US aviation investigators have also inspected the wreckage to see if there were any technical factors that could have contributed to the accident.

Pegasus has had several recent instances of overshooting runways.

Another Pegasus Airlines plane skidded off the runway at the same airport on Jan. 7, causing the temporary closure of the airport. There were no injuries.

In January 2018 another Boeing 737 in the Pegasus fleet slid off a runway at Trabzon Airport in northeastern Turkey. The plane came to rest in the dirt above the Black Sea with its nose pointed toward the water. No one was injured.