The public approval rating of Turkish President Recep Tayyip Erdoğan dropped to 41.9 percent in January from 43.7 percent in December, according to the MetroPOLL polling company.

While 46 percent disapproved of Erdoğan’s job performance, 12.1 percent chose not to answer the question.

November’s high rating was attributed by observers to a military incursion into northeast Syria, which was praised by all the Turkish opposition parties with the exception of the Kurdish Peoples’ Democratic Party (HDP). 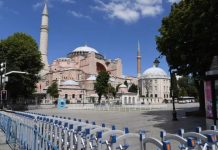