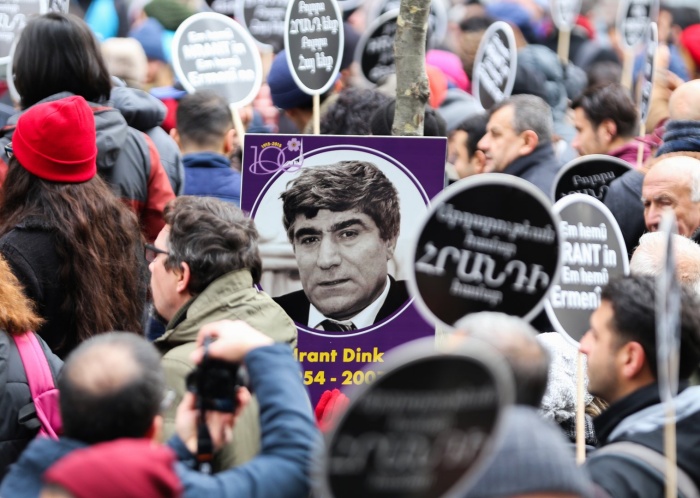 Hundreds of people gathered on Sunday outside the former offices of the Agos newspaper in İstanbul where Turkish-Armenian journalist Hrant Dink was murdered 13 years ago, a killing that sent shockwaves across the country, AFP reported.

Dink was shot dead with two bullets to the head in broad daylight in central İstanbul on Jan. 19, 2007, by a then 17-year-old jobless high-school dropout.

The 52-year-old Dink was editor-in-chief of Turkish-Armenian bilingual Agos weekly and a fierce advocate of reconciliation between Turks and Armenians.

His death became a wider scandal after it was discovered that security forces were aware of the murder plot but failed to act.

“For Hrant, for justice,” the crowds chanted in Istanbul. “We have not forgotten and we will not let it be forgotten.”

A giant picture of Dink was hanging outside the former Agos building, embellished with slogans reading “It is not too late to be ashamed” and “This case will not be over before we say it’s over.”

Turkish police heightened security and blocked the street where the commemoration was being held.

After the ceremony carnations were laid on the sidewalk where Dink was shot dead.