A high criminal court in Ankara has acquitted all defendants of murder in a trial involving the enforced disappearance or execution of 19 people in Turkey’s Southeast in the 1990s at the hands of JİTEM, or Gendarmerie Intelligence and Counterterrorism, the Bianet news website reported.

All defendants in the case, including then-Interior Minister Mehmet Ağar and former high-ranking special operations and intelligence officials, were acquitted of murder in the latest hearing of the trial at the Ankara 1st High Criminal Court on Friday. The court also ruled that the case against defendant Ahmet Demirel, who died during the course of the trial, will be dropped.

As Mahmut Yıldırım, known by the code name Yeşil and believed to be a deep state actor, is still considered a “fugitive,” the court ruled for the separation of his case. He is wanted for the murder of eight people.

None of the defendants attended Friday’s hearing.

Murat Yılmaz, one of the lawyers for the families of the victims, said the court’s ruling was not surprising because the Turkish government had made a deal with former minister Ağar and the court was not expected to make a fair judgment.

The activities of JİTEM had first been acknowledged officially by former prime ministers Bülent Ecevit and Mesut Yılmaz following the Susurluk incident, a fatal car crash that exposed links between state officials and organized crime bosses.

JİTEM was later accused of involvement in the torture, disappearance and execution of Kurdish politicians and businesspeople during the 1990s, a period of bloody conflict between Turkey and Kurdish militants. 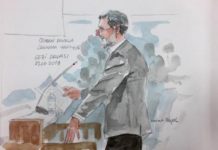