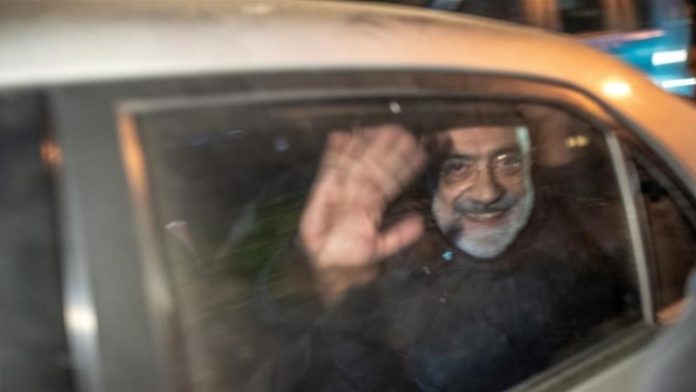 Prominent rights group Amnesty International has launched a letter campaign to secure the release from prison of Turkish journalist and novelist Ahmet Altan, whom the group described as a “prisoner of conscience.”

A prominent writer and journalist, Altan was first arrested after a 2016 failed coup on charges of supporting the coup attempt. He spent a total of 1,138 days in prison until his release on Nov. 4. He was re-arrested one week later.

A sample letter posted on Amnesty’s website addresses Turkey’s Justice Minister Abdülhamit Gül. Amnesty calls on everyone to take action and write an appeal in their own words or use the sample letter to raise their voice against Altan’s arrest.

“I am writing to you regarding the re-arrest of novelist Ahmet Altan on 12 November, eight days after he was released from over three years of prison detention.

Ahmet Altan was first detained and remanded in prison in September 2016. He was prosecuted for his alleged support for the 2016 attempted coup to overthrow the government solely based on his journalistic work critical of  the  government  and  contacts  with  alleged  followers  of  the  religious  cleric  Fethullah  Gülen,  whom  the government holds responsible for the coup attempt. In February 2018 Ahmet Altan was sentenced to life in prison without the possibility of parole for ‘attempting to overthrow the constitutional order’, despite an alarming lack of evidence of any internationally recognizable crime. Ahmet Altan appealed the verdict and on 5 July 2019 the Supreme Court of Appeals decided to overturn his conviction and ordered a retrial.

On 4 November, the İstanbul Heavy Penal Court No. 26 convicted Ahmet Altan and sentenced him to 10-and-a-half years in prison on the basis of the same evidence that had seen him convicted at the first trial – his writing and comments that are critical of the government. The court ruled that he be released pending his appeal, with an international travel ban.

The prosecutor appealed the court’s decision to release Ahmet Altan arguing that he poses a flight risk and that he showed  no  remorse.  Although  the  court’s  decision  that  he  would  be  re-arrested,  was  leaked  to  pro-government media, he remained at his home and was detained there, demonstrating he had no intention of ‘fleeing’. He has consistently rejected the charges for which the prosecution has failed to provide any credible evidence.   I urge you to release Ahmet Altan immediately and unconditionally as he is a prisoner of conscience jailed solely for exercising his right to freedom of expression.”