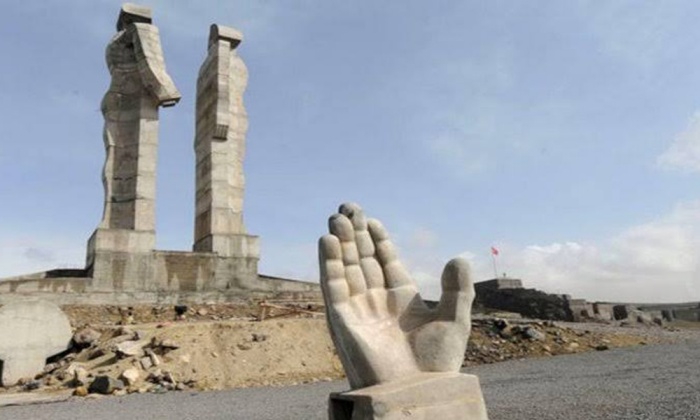 Turkey’s Constitutional Court has ruled that Mehmet Aksoy suffered a violation of his rights when a statue he had sculpted was described as “monstrous” by then-Prime Minister and current President Recep Tayyip Erdoğan and subsequently demolished.

The sculptor will be paid compensation in the amount of TL20, 000 (around $3,500), according to Turkish media reports.

The court ruled that the artist’s right to freedom of expression had been violated.

Erdoğan described Aksoy’s “Statue of Humanity” as a “monstrosity” and suggested it should be removed during a visit to the eastern Turkish province of Kars in 2011.

The monument was designed to symbolize friendship between Turkey and Armenia and featured two 30-meter-high human figures facing each other on a mountain above Kars, close to the border between the two countries.

It was never completed and was demolished a few months after Erdoğan made his remarks. Aksoy filed an application at the Constitutional Court in 2014 claiming that his rights were violated in the removal of the statue.