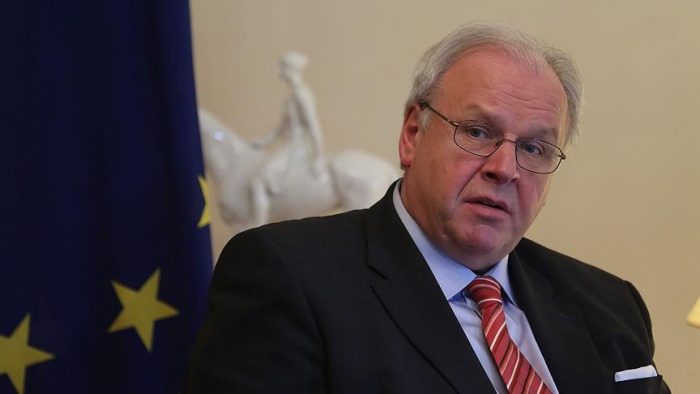 Germany’s ambassador to Turkey said the arrest of a Turkish lawyer hired by the German Embassy is “incomprehensible” and that he is pressing Ankara to clarify the charges, according to a statement seen by Reuters.

The lawyer was arrested in mid-September, a German official said on Wednesday.

“Our legal consultant has provided our Embassy with support that is ordinary from an international perspective and undoubtedly not forbidden. Such cooperation should be possible without any obstacles,” Ambassador Martin Erdmann said in a statement.

“This arrest is incomprehensible for us. This is why we are making intense efforts for the charges being mentioned to be made clear, and we have brought this up repeatedly with Turkey,” Erdmann added.

German Foreign Minister Heiko Maas also said the arrest was “in no way understandable” and that he would raise the issue with his Turkish counterpart, Mevlüt Çavuşoğlu, during the G20 foreign ministers summit in Japan.

“We believe that there needs to be a swift resolution to this and I will of course tell that to my colleague here,” Maas was quoted as saying by Deutsche Welle English service.

The head of Germany’s Federal Office for Migration and Refugees (BAMF) described the situation as a “foreign policy scandal.”

The lawyer had been hired by the German Embassy to provide documents related to Turkish citizens who had applied for asylum in Germany, German media reported.

“Legal consultants are important counterparts at our Embassy in Ankara, as they are at all our missions, in clearing up and better evaluating issues related to the regulations of the country we are in,” Erdmann said.

The number of Turks seeking asylum in Germany has risen since a 2016 failed coup that President Recep Tayyip Erdoğan says was planned by supporters of US-based cleric Fethullah Gülen who were deeply embedded in Turkey’s institutions.

Between January and October of this year, some 9,500 Turks applied for asylum in Germany, up 8 percent from the same period last year, official figures show, making Turks the third-largest group of asylum seekers after Syrians and Iraqis.