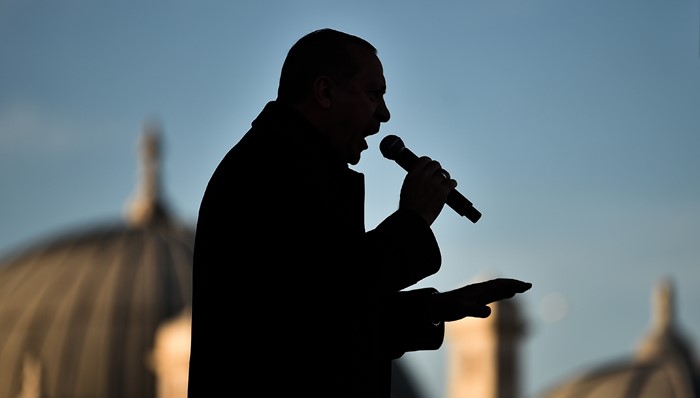 Turkey’s government used a Washington-based law firm to gather information about its critics, including residents of the US, who it believed were allied with a political movement that President Recep Tayyip Erdoğan regards as a central enemy, according to documents reviewed by The Wall Street Journal.

The information, gathered at the behest of the Turkish Embassy in Washington, was transmitted to public prosecutors in Turkey, according to two Turkish government memorandums marked “secret.”

The documents underscore Ankara’s intense antipathy toward individuals and groups it sees associated with Fethullah Gülen, an Islamic cleric who leads a worldwide faith-based movement from exile in rural Pennsylvania.

Erdoğan, who met with President Donald Trump at the White House on Wednesday, has demanded that the US extradite Gülen to Turkey, accusing the cleric of being behind a 2016 coup attempt against the president. US officials have said Ankara has not provided sufficient proof of Gülen’s involvement, and Gülen denies having played any role in the matter.

Since the coup attempt, more than 600,000 investigations have been opened by Turkey into people considered members of movements such as Gülen’s, the State Department said earlier this year in its annual report on human rights. More than 80,000 people have been imprisoned in conditions where problems included “suspicious deaths of persons in custody; forced disappearances; torture” and other rights concerns, the State Department said.

To gather information on Gülen’s suspected followers in the US, the Turkish Embassy in 2017 turned to a Washington law firm, Saltzman & Evinch PLLC, which has long represented Ankara’s interests in the US.

The lengthy report the firm compiled, drawn from public databases, social media and other open-source information, was transmitted to Turkey’s Foreign and Justice ministries and from there to public prosecutors in Ankara, İstanbul and elsewhere in Turkey, the documents show.

David Saltzman, a principal in Saltzman & Evinch, said in a statement: “As is widely known, we have represented the government of Turkey in a variety of matters over the years, including federal litigation. But we are proscribed from commenting on this matter due to the attorney-client privilege.”

The law firm is also representing Turkey’s government in civil lawsuits brought by individuals who say they were attacked by members of Erdoğan’s security detail while demonstrating peacefully during the Turkish president’s last visit to Washington in May 2017.

The documents reviewed by the Journal include dozens of pages that denote authorship by Saltzman & Evinch, as well as some material profiling suspected Gülenists in the US that is of uncertain origin. None of the material suggests that covert surveillance operations or electronic hacking of the groups and individuals was conducted.

The law firm’s report profiles five senior staff members of Virginia International University, based in Fairfax, Va., as well as nine people at the Washington-based Rumi Forum, which says its mission is “to foster intercultural dialogue” and is openly associated with Gülen. The report also contains information regarding two Turkish-American organizations and five other individuals.