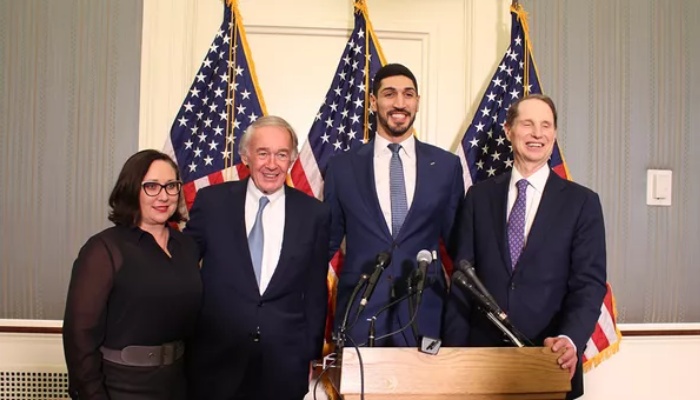 Turkish NBA player Enes Kanter, a vocal critic of Turkish President Recep Tayyip Erdoğan, teamed up with two Democratic US senators on Tuesday as they introduced a bill to condemn the alleged violation of human rights in Turkey, according to Reuters.

As Erdoğan arrived in the United States for a White House meeting on Wednesday with US President Donald Trump, Senators Edward Markey and Ron Wyden held up Kanter as a victim of the Turkish government’s targeting of political rivals.

Turkey seeks the international arrest and extradition of the Boston Celtics center over his links to US-based cleric Fethullah Gülen, accused of orchestrating a failed coup in 2016. Kanter has also had his passport canceled and has not been able to travel abroad with his team.

“President Erdoğan is conducting one of the biggest campaigns to restrict rights and freedoms anywhere in the world,” said Markey, pointing to the arrests or imprisonment of 80,000 citizens and closure of associations and media organizations in opposition to the government.

Kanter said Americans should feel “very lucky and blessed” to have a country with democracy, freedom and human rights.

“Sadly none of this is in my country, but it’s just amazing to see support from not just these two gentlemen but from my teammates, from my coaches and from all these fans,” Kanter said. “So that is why I cannot thank America enough.”