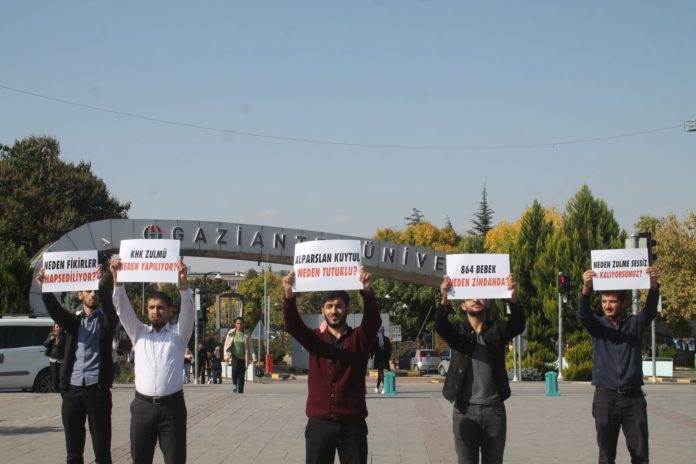 An investigation has been launched into a group of students from Gaziantep University in southeastern Turkey for staging a protest against rights violations in Turkey and the imprisonment of small children with their mothers, the Aktif Haber news website reported.

During a recent protest in front of the university, the students carried placards on which there were questions such as “Why are ideas being imprisoned?”, “Why is the KHK tyranny?”, “Why is Alparslan Kuytul in jail?”, “Why are 864 babies are in jail?” and “Why do you remain silent to the acts of tyranny?”

The students are members of the Furkan Volunteers, a group affiliated with the Furkan Foundation, whose chair, Kuytul, has been behind bars since January 2018.

Kuytul is being tried on charges of “leading a criminal organization” that allegedly aimed to carry out activities threatening the public order. The leader of the small Islamist group was an outspoken critic of the Turkish government led by President Recep Tayyip Erdoğan and the executive presidential system in the country.

“KHK” refers to decrees issued by the Turkish government in the aftermath of a failed coup in July 2016 as part of which more than 150,000 public servants were removed from their jobs under the pretext of an anti-coup fight.

As part of the government’s post-coup crackdown, more than 600,000 people have been investigated and more than 30,000 including 17,000 women, were arrested on terrorism or coup charges.

Some 800 small children are currently accompanying their mothers in Turkey’s prisons.