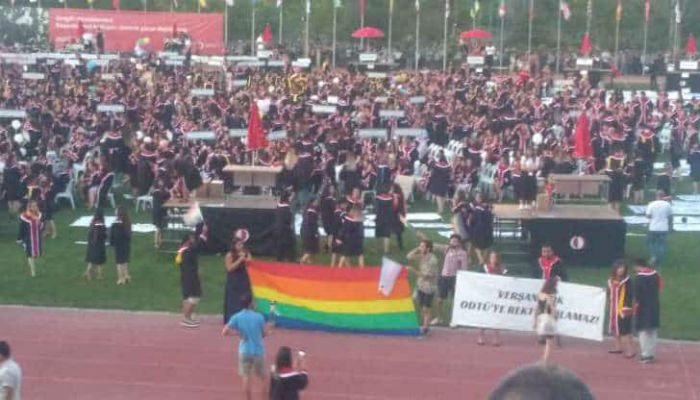 “Eighteen students and one academic from Middle East Technical University [ODTÜ] in Ankara … are facing criminal charges for allegedly joining an LGBTI Pride Parade on the University’s campus on 10 May,” an Amnesty statement issued on Thursday said. “The trial will start on 12 November.”

“Some of them have stated that they did not participate in the parade and were just bystanders. No one should be prosecuted for exercising their rights to freedom of expression and peaceful assembly and charges against them must be dropped.”

The indictment drafted by a prosecutor in Ankara cited the LGBTI parade as “an unlawful assembly,” Amnesty revealed.

“On 6 May 2019, [ODTÜ] rector, Mustafa Verşan Kök, wrote to students and staff that the Parade would not be allowed, referring to an ordinance issued by the Ankara Governorate on 3 October 2018 that imposed a blanket ban on all LGBTI events in Ankara and without giving further justification,” it said.

“On 10 May, police officers entered the [ODTÜ]  campus on the request of the university management to disperse students who had peacefully gathered to celebrate Pride. When students did not disperse, police officers broke up their gathering with pepper spray, plastic bullets and tear gas. Several people were injured, thankfully none seriously. At least 22 people were then detained, among them the nineteen who are currently facing criminal charges.”