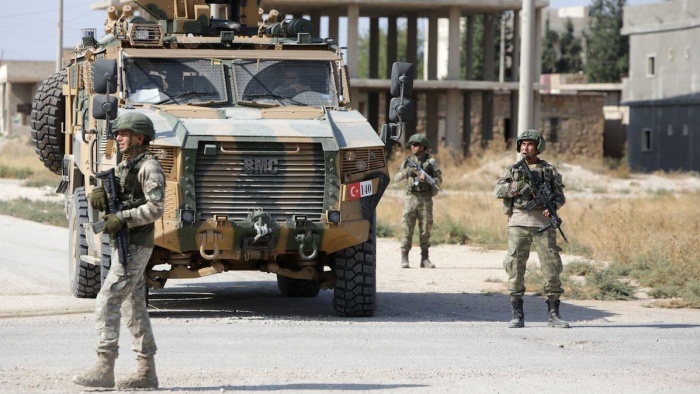 Russian forces have begun to deploy towards the Turkish-Syrian border as part of a deal to remove Kurdish troops, with units already entering the two key border towns of Kobane and Manbij, BBC reported on Wednesday.

Under the deal agreed by Russia and Turkey, Kurdish fighters were given 150 hours from noon on Wednesday to pull back 30 kilometers (18 miles) from the border.

Turkish troops will continue to control an area they took during a recent offensive against the Kurdish fighters, regarded by Turkey as terrorists.

The Turkish offensive began after the US announced a sudden and unexpected withdrawal of its troops from northern Syria. The US troops had been supporting the Kurdish fighters, who have been allies in the fight against the Islamic State in Iraq and the Levant (ISIL) in the region.

The deal was negotiated by Turkish President Recep Tayyip Erdoğan and his Russian counterpart, Vladimir Putin, after lengthy talks in the Black Sea resort of Sochi on Tuesday.

It was agreed that Russian and Syrian forces would oversee the Kurdish pullback in an area from the Euphrates River, just east of Manbij, right up to the Iraqi border in the east.

On Wednesday Russia’s defense ministry said its forces had crossed the river at noon and “advanced towards the Syrian-Turkish border.”

Both towns lie outside the area forming part of Turkey’s military operation, and Russia’s foreign ministry said on Wednesday Turkish forces would not be deployed there, according to the Ria Novosti news agency.

The deal does not cover the area currently under Turkish military control — between the towns of Ras al-Ain and Tal Abyad. The Turks will be allowed to retain control there. Turkey’s military says the US has told it that all Kurdish fighters have now left that area.

Kurdish militias and political leaders have made no comment on whether they will agree to the demands.

Kremlin spokesman Dmitry Peskov said if the Kurds did not retreat, the Syrians and Russians would fall back and leave them to face “the weight of the Turkish army.”

Syria’s President Bashar al-Assad has in the past raised concerns about foreign interference in Syria, but the Kremlin said he had thanked President Putin and “expressed his full support” for the deal.

Just over two weeks ago President Donald Trump announced that he would be withdrawing US troops from Syria. Soon after, Turkey launched an offensive against the Kurdish forces.

Russia stationed troops near the border over concerns that Syria’s territory was being encroached upon by a foreign power.

Turkey agreed to pause its assault last week at the request of the US to “facilitate the withdrawal of YPG forces from the Turkish-controlled safe zone.”

It had been due to expire on Tuesday evening but after the latest deal, Turkey said there was “no need” to re-launch its offensive.