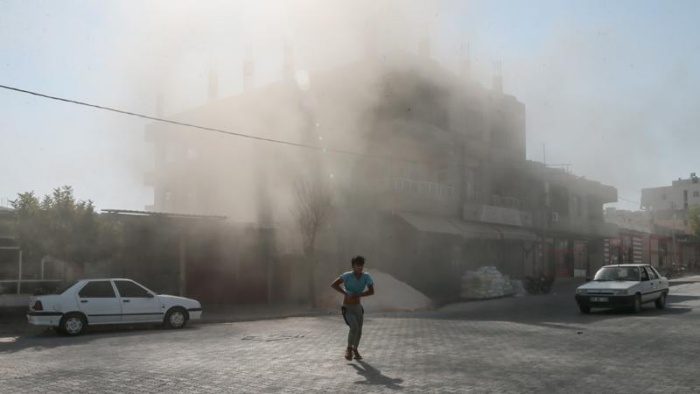 Rockets and mortar shells fired by the Kurdish People’s Protection Units (YPG) on several Turkish districts in Turkey’s southeastern provinces of Şanlıurfa and Mardin killed six people including a baby and injured 70 others, according to statements from the governors’ offices.

The projectiles hit the Akçakale and Ceylanpınar districts of Şanlıurfa as well as the Nusaybin district of Mardin, directly across the border from YPG-held northeastern Syrian territory where Turkey has launched its Operation Peace Spring.

“A 9-month-old baby, Muhammed Omar, and a civil servant at the Akçakale tax office, Cihan Güneş, have become the first martyrs of Operation Peace Spring,” said the Şanlıurfa Governor’s Office, adding that 46 people were also injured in the two districts.

The baby was the son of a Syrian family who took shelter in Turkey after they fled the ongoing civil war in their country.

An 11-year-old girl named Elif Terim also died in Ceylanpınar when she was hit by a projectile while playing in the street.

The remaining three victims were from the Nusaybin district of Mardin — a 48-year-old woman, Fatma Yıldız, and her two daughters, 12-year-old Emine and 15-year-old Leyla, according to a statement from the Mardin Governor’s Office. Twenty-four people were injured after being hit by shells or projectiles fired from the other side of the Syrian border.

Earlier reports on Thursday indicated rocket and mortar attacks against civilian targets at several locations along the Turkish-Syrian border. The police have reportedly been urging residents to move away from the border and remain in their houses.

Turkey on Wednesday launched its offensive, Operation Peace Spring, against the YPG, which it considers a terrorist group and the Syrian branch of the outlawed Kurdistan Workers Party (PKK).

The operation came after the United States announced it was withdrawing its troops from the region, effectively abandoning the Syrian Democratic Forces (SDF), its main ally in the battle against the Islamic State in Iraq and the Levant (ISIL) armed group.