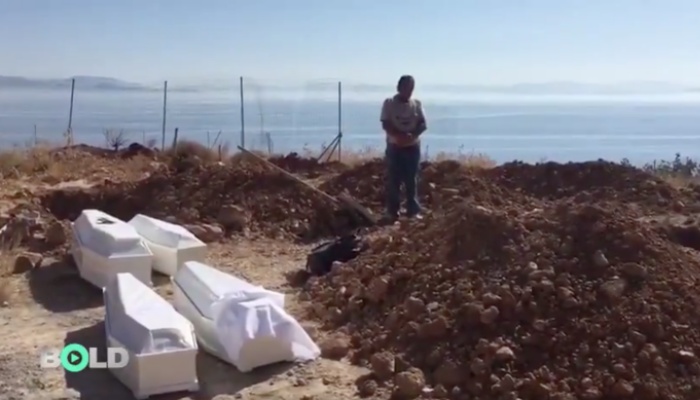 Seven Turks — two women and five children — who drowned when a boat carrying 19 people capsized on Sept. 27 in the eastern Aegean Sea, were buried on the Greek island of Chios on Wednesday, Bold Medya reported.

The boat was carrying Turkish academics and jurists and their family members who had to flee the country due to an ongoing government crackdown on followers of the Gülen movement.

The academics and judicial members were among the more than 150,000 public servants who were removed from their posts by the government in the aftermath of the coup attempt due to their alleged links to the Gülen movement. The government also revoked their passports.

Among the victims were 4-month old Mahir Işık and 3-year-old İbrahim Işık, the children of two judges, Fatma and Nasır Işık, who survived the tragedy.

Twelve-year-old Mustafa Said Zenbil, 40-year-old Meltem Zenbil and her mother 58-year-old Kevser Sezer were the family members of Oğuz Zenbil, who survived the tragedy with his elder son, Bedirhan.

Oğuz Zenbil was an academic at a university in Konya that was closed down by the Turkish government due to its alleged links to the Gülen movement.

The two other victims of the tragedy were identified as 6-year-old Mustafa Kara and 8-year-old Gülsüm Kara; however, there was no information regarding their family members.

The survivors of the tragedy attended the funerals on Chios, where local administrators also extended their support for preparation of the ceremonies and burial of the victims.

In the meantime, Turkish journalist Murat Sevinç, who writes for the Gazete Duvar news website, harshly criticized some Turkish media outlets and journalists who reported on the news of the boat tragedy, saying, “Fetö members drowned in the Aegean Sea.”

Fetö is a term coined by the Turkish government to refer to the Gülen movement as a terrorist organization.