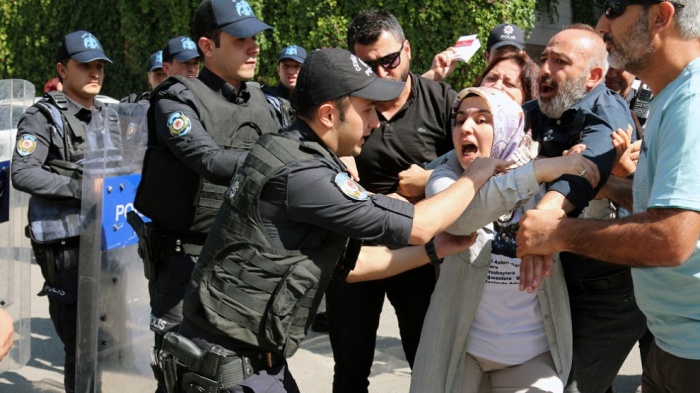 The mothers of former two military cadets who are among dozens of cadets jailed in the aftermath of a failed coup in July 2016 were detained immediately after leaving their houses to take part in a protest in the Turkish capital city of Ankara, Bold Medya reported.

The women, demanding justice for their sons, who were detained after the failed coup, tried on charges of terrorism and handed down lengthy prison sentences, recently announced that they would hold a demonstration on Ankara’s Sakarya Street every Wednesday protesting the imprisonment of their sons. The mothers were to hold their first such protest on Wednesday but two of them, Melek Çetinkaya and Fadime Akgül, were detained just after leaving their houses.

In a video she shot in a police vehicle with her cell phone after being detained, Çetinkaya called on all rights defenders in the country for help.

A total of 259 military cadets are currently held behind bars, according to Ömer Faruk Gergerlioğlu, a deputy known for his advocacy for human rights. The cadets say they did not have any information about the coup attempt and were told by their superiors that they were going to intervene in a terrorist attack on the night of the coup attempt on July 15, 2016.

Turkey dismissed some 150,000 civil servants after the coup attempt while more than 30,000 have been jailed on coup or terrorism charges.