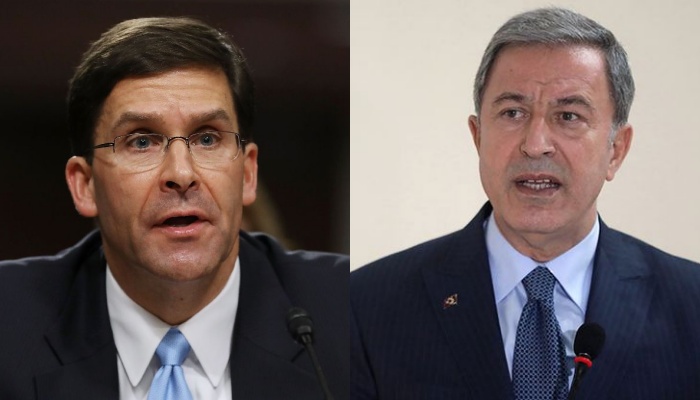 The Turkish and US defense chiefs on Wednesday spoke over the phone and agreed to launch the first phase of a Syria safe zone plan, the state-run Anadolu news agency reported.

Hulusi Akar and Mark Esper also agreed that military delegations from the two countries would soon meet in Ankara to discuss the next stages of the Syria safe zone plan, according to a Turkish Defense Ministry statement.

Akar said the safe zone east of the Euphrates River in Syria should be established within the framework of principles set out in the agreement as soon as possible, the statement said.

The statement did not further explain the features of the first phase of the Syria safe zone plan.

Turkish and US military officials had reached an agreement on Aug. 7 that a safe zone in northern Syria would be a “peace corridor” for displaced Syrians hoping to return home as well as to establish a Joint Operations Center in Turkey to coordinate the establishment of the safe zone.

Turkey’s agreement with the US on a safe zone in northern Syria is a “positive step,” a Turkish presidential aide also said on Wednesday.

Speaking to reporters after a Cabinet meeting, İbrahim Kalın said negotiations with the US on the implementation of the safe zone are still ongoing.

Kalın stressed that Turkish President Recep Tayyip Erdoğan would speak with his Russian counterpart, Vladimir Putin, on the phone about Idlib in the next couple of days.

Erdoğan will also have a phone call with US President Donald Trump about the safe zone on Thursday or Friday, he added.

Referring to the establishment of the safe zone, he said joint patrols of US and Turkish troops would begin soon east of the Euphrates, adding that Turkish drones have already started to fly in the region.