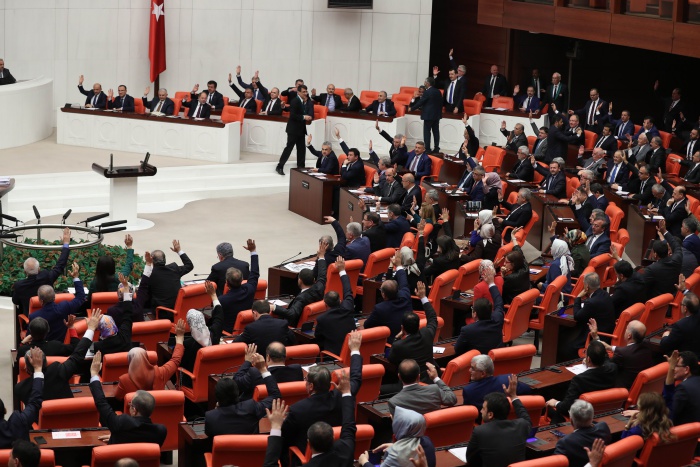 Two years after Turkey voted to adopt a presidential system of governance and one year after its full implementation, a poll conducted by research company PİAR indicated that 62.5 percent of Turks support the parliamentary system, the Diken news website reported on Friday.

Only 26 percent said the current system should be preserved as is, while 11.5 percent were undecided.

The presidential system received no support among voters of the opposition Republican People’s Party (CHP) and the İyi (Good) Party, while 60.1 percent of supporters of the ruling Justice and Development Party (AKP), which spearheaded its adoption via a referendum in April 2017, favored it.

Among voters of the Nationalist Movement Party (MHP), which allied itself with the AKP during the referendum as well as recent local and general elections, 55.2 percent expressed a desire to return to the parliamentary system.

The new system was approved with 51.4 percent support in the 2017 referendum. PİAR’s poll showed that 17.6 percent of those who voted “yes” at the time think the new system is harmful, while 59.9 percent find it useful.

On the other hand, the poll results showed that if elections were to be held today, the AKP would receive 36.7 percent support, followed by the CHP with 29.1 percent, the Kurdish Peoples’ Democratic Party (HDP) with 12.2 percent and the MHP with 10.8 percent. The İYİ Party would receive 9.1 percent of the vote, which would mean scoring below the 10 percent threshold and failing to win seats in parliament.

As regards the presidency, respondents who indicated that they would definitely vote for current President Recep Tayyip Erdoğan amounted to 36.3 percent, a figure that is close to those who would vote for his AKP in a general election. People who said they would absolutely not vote for Erdoğan stood at 54.7 percent, while 9 percent said it would depend on the other candidates.

The poll also indicated that 55 percent of Turks do not favor an early election.