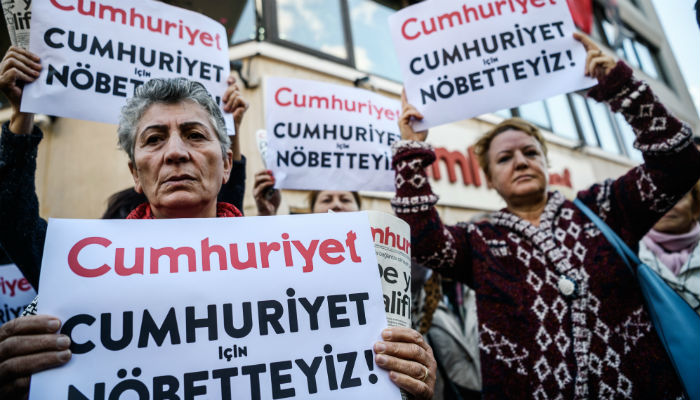 A criminal department of Turkey’s Supreme Court of Appeals has refused to uphold prison sentences handed down to several journalists and media staff in the Cumhuriyet newspaper case, sending the file back to the lower court for recommended acquittal, Deutsche Welle Turkish service reported on Thursday.

The court also recommended the acquittal of seven others including journalist Kadri Gürsel and cartoonist Musa Kart, whose files were previously upheld by a mid-level court of appeals as their sentences were shorter than five years.

Under normal circumstances, a petition for review for sentences of less than five years cannot be filed with the Supreme Court of Appeals.

The ruling ordered a retrial for journalist Ahmet Şık, who had received seven years, six months for allegedly aiding terrorist groups. The court said Şık’s sentence must be vacated and that he should instead be tried for spreading propaganda on behalf of terrorist groups and openly denigrating state institutions.

In April the defendants whose sentences were upheld had turned themselves in. Tora Pekin, a lawyer for the defendants, called for their immediate release since it has become clear that they were held behind bars for no reason.

A press freedom report by the Council of Europe recently named Turkey the world’s largest jailer of journalists.

The country was ranked 157th out of 180 countries in the 2019 World Press Freedom Index published by Reporters Without Borders.