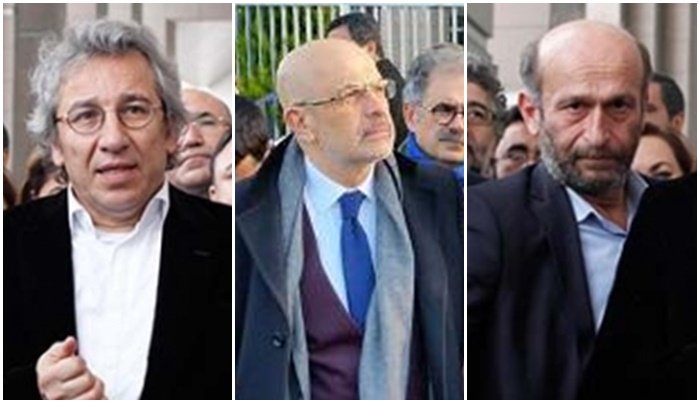 A Turkish court has declined to sentence former Cumhuriyet newspaper Ankara representative Erdem Gül and opposition deputy and former editor-in-chief Enis Berberoğlu in the National Intelligence Organization (MİT) trucks case, ruling that Berberoğlu’s current sentence for another crime is sufficient and dropping the case against Gül, the Evrensel newspaper reported on Wednesday.

The two journalists were on trial in İstanbul on charges of aiding terrorist groups due to their alleged role in the publishing of a report on MİT trucks transporting weapons to rebels in Syria in 2014.

The prosecutor had demanded up to 15 years’ imprisonment for both.

The court decided that Berberoğlu, who at the time was editor-in-chief of the Hürriyet daily, has already been adequately punished, in reference to a 25-year sentence he is serving for leaking classified information to Cumhuriyet daily journalists in May 2015.

It said there were no grounds for him to be handed down another sentence in this case.

As for Gül, the court ruled that he should have been charged with violating the confidentiality of an investigation instead of aiding terrorist groups. Gül’s case was dismissed on the grounds that the statute of limitations of four months prescribed in the press code has already expired.

After the hearing, Gül gave a statement in which he stood by his publications.

“Journalism is about writing stories, taking pictures and publishing them. It’s about looking out for the public, which is not a crime,” he said. “Sooner or later Turkey will be a place where journalism is not treated as such.”

When the MİT trucks story first broke in 2015, it sparked a political firestorm in Turkey about the role of the Turkish spy agency in arming rebel factions in Syria and prompted an investigation into Cumhuriyet daily journalists Can Dündar and Erdem Gül, who published the report.

They were first jailed while facing trial on charges of espionage for publishing footage purporting to show MİT transporting weapons to Syria in 2014. Later, the two journalists were released pending trial.

When Dündar later published a book titled “We Are Arrested: A Journalist’s Notes from a Turkish Prison,” he mapped out the details of the news story on May 27, 2015, revealing that it was a leftist lawmaker who brought the information to him.

Upon the revelation, the İstanbul prosecutors launched a new investigation, examined Dündar’s phone calls during the days leading up to the publication of the story and detected a phone conversation between CHP deputy Berberoğlu and Dündar on May 27.

A new indictment was then drafted, naming Berberoğlu.

In September 2016, an İstanbul court decided to merge the trial of journalists Dündar and Gül with that of Berberoğlu.