New Zealand Prime Minister Jacinda Ardern has announced that the Islamic call to prayer will be broadcast nationally following two minutes of silence on Friday to show support for the Muslim community in the country as they return to mosques after a terrorist attack in Christchurch that killed 50 worshippers last week.

Ardern’s announcement came after a comment made by the Turkish president threatening violence to Australians and New Zealanders coming to Turkey.

President Recep Tayyip Erdoğan had criticized the Anzacs for their role in the Gallipoli campaign of 1915 and threatened to return anyone who came to his country with anti-Islam sentiment back in coffins. More than 11,000 Australians and New Zealanders died in the Battle of Gallipoli, an effort on the part of the Entente powers to wrest control of the Dardanelles from the Ottoman Empire.

Erdoğan — who is seeking to drum up support for his Islamist-rooted Justice and Development Party (AKP) in March 31 local elections — also said Turkey would make the suspected attacker pay if New Zealand did not. The comments came at a campaign rally that included gruesome video footage of the shootings which the alleged gunman had broadcast on Facebook.

“There is a desire to show support to the Muslim community as they return to mosques, particularly on Friday. There is also a desire among New Zealanders to mark the week since the terrorist attack. To acknowledge this, there will be a two-minute silence on Friday. We will also broadcast nationally the via TVNZ and Radio New Zealand the call to prayer,” Ardern announced on Wednesday. Australian Brenton Tarrant, 28, a suspected white supremacist, was charged with murder on Saturday after a lone gunman opened fire at the two mosques during Friday prayers. 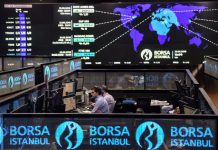 Turkey sold some $44 bln of reserves in 4 months to boost currency: report