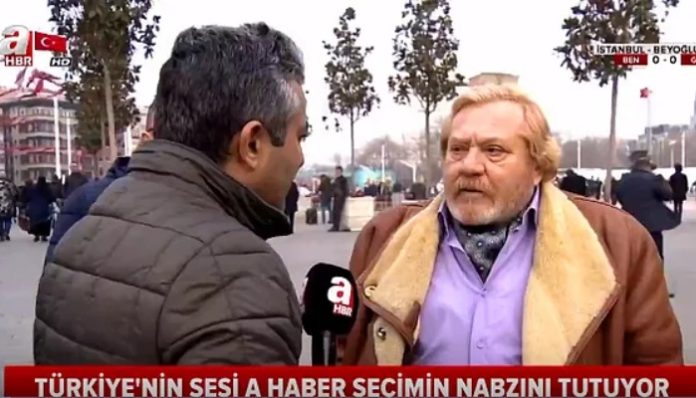 A Haber, a staunchly pro-government Turkish TV station, hired an actor from a casting agency to speak in favor of Turkish President Recep Tayyip Erdoğan in a street interview, according to a journalist.

The man speaking to an A Haber reporter on the street has been identified as Gürsel Cephaneci, an actor.

In the interview Cephaneci says he will vote for Erdoğan’s ruling Justice and Development Party (AKP) in the local elections on March 31 while he praises the AKP’s services and Erdoğan’s “courageous” stand against Western leaders. The man also directs some criticism at main opposition Republican People’s Party (CHP) leader Kemal Kılıçdaroğlu.

After the interview was aired by A Haber, journalist Can Bursalı announced from his Twitter account on Wednesday that he spoke to Kemal Ekenel, the owner of the casting agency for which Cephaneci works.

“Ekenel said A Haber contacted him to conduct an interview with Cephaneci and that Cephaneci spoke to the station after he was tasked by the casting agency,” tweeted Bursalı.

A Haber frequently attracts criticism for reporting inaccurate or provocative news and is accused of being the mouthpiece of the AKP government.