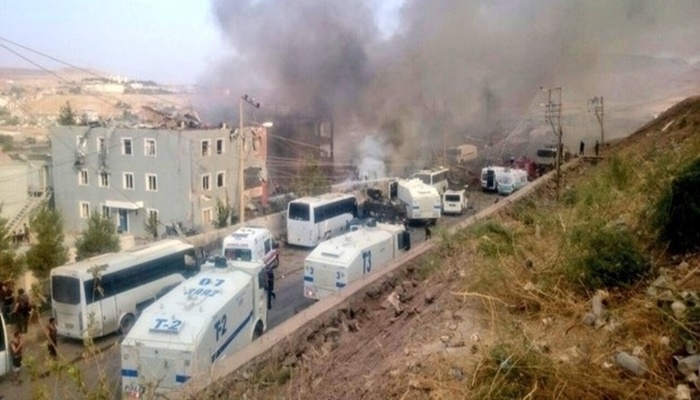 The European Court of Human Rights (ECtHR) has declined to consider a complaint regarding curfew incidents in Cizre in which 137 people were killed in counterterrorism operations in southeastern Turkey in 2015-2016 on the grounds that domestic legal remedies have not yet been exhausted.

The Mezopotamya news agency reported the decision, sparking criticism from law professor Kerem Altıparmak, who tweeted on Thursday that the ECtHR is disconnected from reality.

In February 2018, a report by scientists from the Vaudois University Hospital Center (CHUV) in Switzerland showed that residents who took shelter in the basement of a building in a neighborhood of Turkey’s southeastern Cizre district during the curfews were killed by gunshots and then burned.

According to a story on the Dicle news agency website, forensic medicine scientists at CHUV recently published a report following research on the remains of Berjin Demirkaya, who was trapped in the basement of a residential building in the Cudi neighborhood of Şırnak’s Cizre district. The report said she was killed before her body was burned.

After Turkey’s local authorities lifted the curfew in February of 2017, family members found several burned body parts at the basement and claimed that civilians were killed by Turkish military forces and burned to destroy the evidence.

Turkish army and police carried out a wide-ranging operation on Feb. 7, 2016 when they raided the building in Cudi, where dozens of people were wounded and reportedly killed. According to the news reports on Turkish TV, more than 60 people were trapped and may have been killed during the operation.

According to a report by Turkish human rights organization Mazlumder following the incident, more than 200 people were killed and over 10,000 houses were destroyed in Cizre alone during curfews that were imposed after July 2015.

During months-long curfews in Cizre’s Sur, Cudi and Nur neighborhoods, thousands of people, including children, women and elderly people, were trapped in their homes.

“Cizre witnessed unprecedented destruction following clashes which took place during a curfew lasting over 78 days, and unlike in curfews before, the curfew in Cizre saw mass killings,” Mazlumder said.

Following the collapse of a settlement process for the Kurdish issue in Turkey in July 2015, there were repeated clashes between security forces and outlawed Kurdistan Workers’ Party (PKK) members in southeastern provinces that resulted in nearly 200,000 locals leaving their homes due to fighting and curfews.