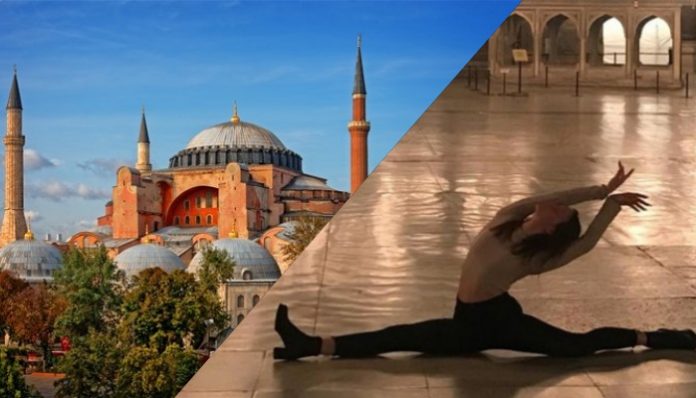 İstanbul’s Hagia Sophia museum administration has announced it launched an investigation after a photo of a ballerina doing the splits inside the historic building appeared on Instagram.

The photo was posted by Turkish businesswoman Leyla Alaton, who said she took the picture during a special visit to the museum on Saturday evening with a 150-person group.

Pro-government newspapers and pundits slammed the post, saying that Hagia Sophia has been a sacred place for Muslims and that the scene was disrespectful of Islamic values.

Following a heated row on social media the Hagia Sophia museum administration posted a statement on Twitter announcing an investigation into the incident had been opened.

“Within the limits of our bylaws special events have been held in the evening hours at our museum due to requests from tourism firms. During the evening event on Jan. 5, 2019, a woman visiting our museum did the splits inside the museum, and other visitors took photos,” the statement said.

Hagia Sophia, built during the years of the Byzantine Empire, was converted into a mosque after the conquest of İstanbul by Ottoman Sultan Mehmet I in 1453.

Mustafa Kemal Atatürk, the founder of modern Turkey, turned the building into a museum in 1935.

In recent years, in accordance with neo-Ottomanism, which seeks to revive the Ottoman mentality in modern times, some Islamists have worked to turn the Hagia Sophia into a mosque again.