Turkey’s annual rate of consumer price inflation fell to 20.3 percent last month, according to figures released on Thursday by the Turkish Statistics Institute (TurkStat) — down from 21.62 percent in November, the Financial Times reported.

Turkey has long struggled with high inflation, but the figure had reached a high of 25 percent in October following a currency crisis over the summer that sent the Turkish lira crashing to a series of record lows.

Inflation fell 0.4 percent on a monthly basis in December, according to TurkStat.

“We have achieved almost all our yearend targets,” Treasury and Finance Minister Berat Albayrak said during a recent TV appearance.

Albayrak had declared an “all-out war” against high inflation in November by introducing reduced taxes on some merchandise and asked companies to decrease prices by 10 percent. 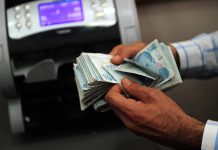