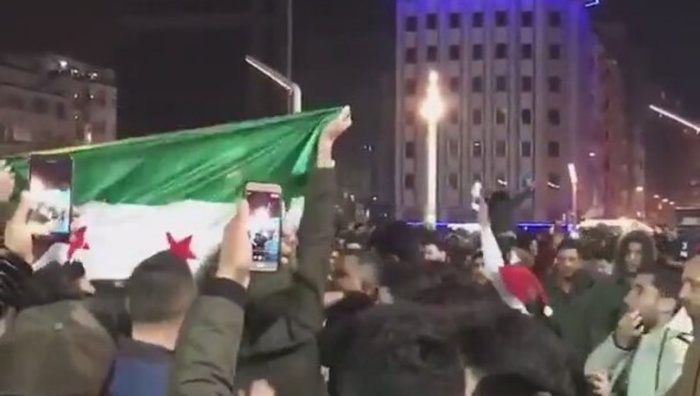 A video of a group of Syrian refugees celebrating the new year in Taksim Square and on İstiklal Street in İstanbul went viral and caused tensions on Turkish social media.

The video featured a group of predominantly male young Syrians chanting and waving a flag that represents the Free Syrian Army (FSA), an armed group that brings together rebel factions fighting against the Syrian government.

Also featured on the video was the voice of the man shooting the footage, who said: “We’re on İstiklal Street and there’s not a Turk around. Look at what we’ve become. God damn those who brought us to this.”

Many on Turkish social media commented on the video, expressing their unfavorable views on the demographic shift that is underway in Turkey. Some pointed out that there are Turkish soldiers currently stationed in Syria and slammed the young Syrian men for not fighting in their own country.

Sevilay Yılman, a pro-government journalist from the Habertürk newspaper, joined the debate to express her consternation over the footage.

“Let me be clear. I would not go to Taksim. And I would keep people from going. As a matter of fact, not only Turkish citizens, but also foreign tourists refrained from going there because Taksim is not what it used to be during previous new year celebrations. What took place in that square filled with Syrians was not a celebration but rather a demonstration. They chanted slogans about Syrian freedom. I do agree that Syria should be free. And those Syrians who desire it more than us should wave their flags not in Taksim, but in Syria,” Yılman wrote.

Mehmet Akif Ersoy, another Habertürk columnist, said: “The issue of refugees is critical for every country from a socioeconomic and security standpoint. We have to come up with solutions for the future and be able to provide answers to questions as to the number of people coming from that well-known intelligence state who are still in touch with the Assad regime or other intelligence services and how well we are monitoring this aspect of the situation.”

“It is with a great sorrow that I watched the video of the drunken Syrians unfurling Syrian flags and dancing in Taksim. As a Turkish woman, I have come to fear going out in the streets of İstanbul, where I grew up. Please recruit those guys to the military immediately and dispatch them to Syria to fight against the Kurdistan Workers’ Party [PKK],” tweeted Professor Pelin Gündeş Bakır, a former deputy of the ruling Justice and Development Party (AKP) who was known to have close relations with President Recep Tayyip Erdoğan.

During her time as a deputy, Bakır was also a member of the Parliamentary Assembly of the Council of Europe (PACE) and was in charge of studies on minority and migration issues.