According to the latest survey on consumer trends conducted by the Turkish Statistics Institute (TurkStat) and the Central Bank of Turkey, the consumer confidence index stood at 58.2 points in December, a level last seen during the global financial crisis around 2009, the Diken news website reported on Friday.

By falling 2.3 percent compared to the November figure of 59.6, the index maintained a downward trend that started in August, when Turkey’s currency crisis was at its peak.

According to the report, such a low score has not been seen since January 2009, when the economy was still reeling from the effects of the global financial crisis of 2008.

One of the essential economic indicators, the consumer confidence index demonstrates spending tendencies of consumers as well as directly affecting supply dynamics shaped by consumer demand.

Scores above 100 point to an optimistic outlook in consumer confidence, while numbers below 100 indicate pessimism.

Turkey’s economy was shaken by a currency crisis in 2018. While the decline in value of the Turkish lira has stopped and its volatility decreased, interest rates and inflation have continued to rise as 2018 comes to an end. 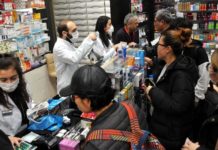 Number of new businesses in Turkey surged by 27 percent in...