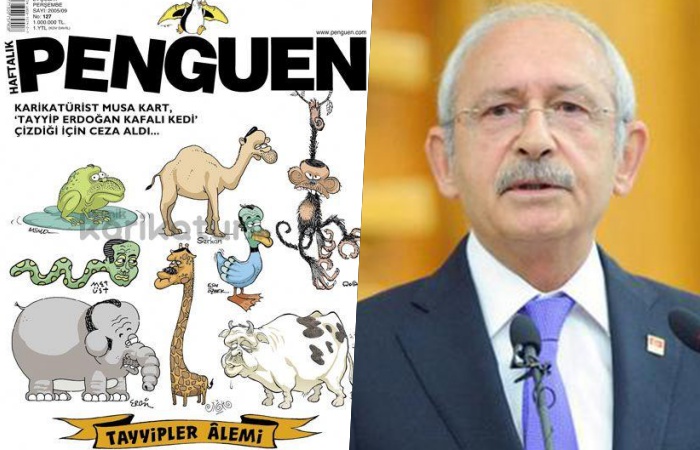 A Turkish prosecutor who filed summaries of proceedings with parliament has demanded a political ban – meaning expulsion from the legislature and a prohibition from participating in politics — for more than 60 opposition Republican People’s Party (CHP) deputies for retweeting a caricature depicting President Recep Tayyip Erdoğan as animals, the Gazete Duvar news website reported on Thursday.

In July four Middle East Technical University (ODTÜ) students were arrested by a court for insulting Erdoğan by carrying a placard that bore a caricature called “Tayyipler Âlemi” (World of Tayyips).

The caricature first appeared in a political satire magazine in 2006.

Then-Prime Minister Erdoğan filed a lawsuit against the magazine; however, an Ankara court dismissed the suit, citing freedom of expression.

After the arrests, CHP leader Kemal Kılıçdaroğlu posted the caricature on Twitter in solidarity with the ODTÜ students, an act that was followed by 72 other deputies from the party through retweeting Kılıçdaroğlu’s post.

An investigation was launched the next day into the CHP’s social media campaign on charges of insulting Erdoğan, which is punishable by one to four years in prison.

According to the Gazete Duvar report, the summaries of proceedings that were sent to parliament by the prosecutor’s office for more than 60 of those CHP deputies included a demand for a political ban.

If parliament votes in favor of lifting the immunity of the deputies for the case, a Turkish court can summon them for a trial.