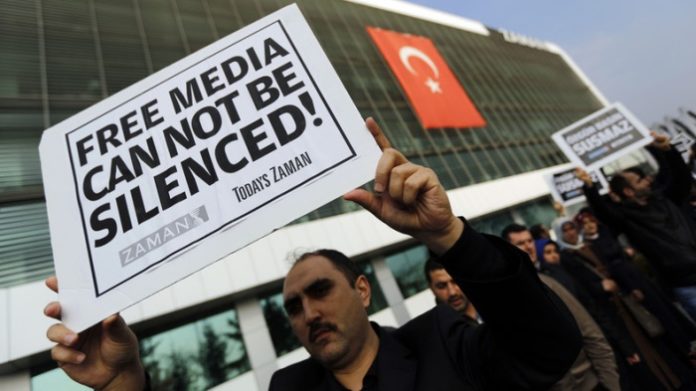 Turkey continues to be the world’s biggest jailer of professional journalists according to a report released on Tuesday by Reporters without Borders (RSF), despite a fall in the number of detainees compared to last year, which the leading media freedom advocacy group described as deceptive.

The report, titled “Worldwide round-up of journalists killed, detained, held hostage, or missing in 2018,” includes comprehensive coverage of all violations against journalists across the globe. The section on Turkey directs attention to the “despotic” nature of the regime while stating that in 2018 more than 80 journalists were given long prison sentences or fines on charges such as “terrorist propaganda,” “denigrating Turkish identity” and “insulting the head of state.”

The RSF annual report also underlined the “inhumanity of some of the sentences,” such as the cases against Mehmet Altan, Ahmet Altan and Nazlı Ilıcak, three journalists aged 65, 68, and 74, respectively, who were sentenced in February to life imprisonment under the severest form of isolation, with no possibility of a temporary release or pardon.

According to RSF “These Kafkaesque trials, in which journalists are accused of terrorism on the basis of a single word or a single phone contact, have helped to tighten the regime’s grip on Turkish society.”

Turkey has been pursuing a crackdown on the media in the aftermath of a July 15, 2016 coup attempt. Almost all media workers who are detained are accused of terrorism without credible evidence.