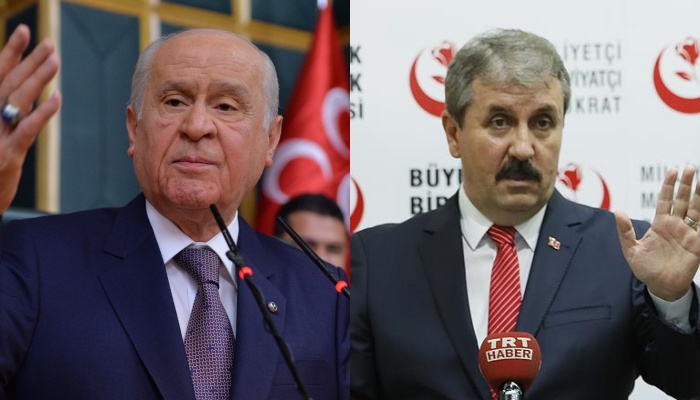 Two opposition party chairmen on the same day warned and threatened to punish potential anti-government protesters in Turkey who might be inspired by protests taking place in France over the last couple of weeks.

Nationalist Movement Party (MHP) Chairman Devlet Bahçeli issued a written statement on Wednesday and said if there are people who long for the “yellow vest terrorism” taking place in France, they would pay a heavy price. According to Bahçeli, a supporter of President Recep Tayyip Erdoğan despite being in opposition, anyone who has “yellow dreams,” a reference to French protesters who wear yellow vests, will have to face his party.

In a similar warning, chairman of the minor opposition Grand Unity Party (BBP) Mustafa Destici told reporters in parliament on Wednesday that in the event of a Gezi-like protest or a coup attempt such as the one that took place in Turkey on July 15, 2016, the state would respond in force.

Hundreds of thousands of people marched in 2013 to protest a plan to build a replica of an Ottoman barracks in Gezi Park in the Taksim neighborhood of İstanbul. The protests turned into a countrywide challenge to Erdoğan’s government.

“Nobody will even dream of protests like Gezi or envy protesters with yellow vests,” Destici warned while claiming that there are members of the outlawed Kurdistan Workers’ Party (PKK), radical far-left Revolutionary People’s Liberation Party/Front (DHKP/C) and  faith-based Gülen movement among protesters in France.