New York prosecutors have withdrawn an appeal to extend the sentence of a former executive of Turkey’s state-owned lender Halkbank, Reuters reported, citing the state-run Anadolu news agency on Thursday.

Halkbank shares rose nearly 4 percent after the report as market participants saw the move as a further indication of an improvement in diplomatic ties between Washington and Ankara.

A US court sentenced Hakan Atilla, an executive of Halkbank, to 32 months in prison in May for helping Iran evade US sanctions in a case that strained already tense ties between NATO allies Ankara and Washington.

Halkbank, which denies any wrongdoing, has since faced potential US fines in relation to the case, which Turkish President Tayyip Erdoğan has condemned as a political attack against his government.

Anadolu, without citing sources, said the New York prosecutor’s office had originally filed the appeal, saying the sentence was too short. It said the court had asked prosecutors to present details of the appeal by Dec. 6 but that the appeal had later been withdrawn.

No further details were immediately available, and the New York prosecutor’s office was not available for comment early on Friday. 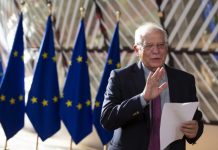