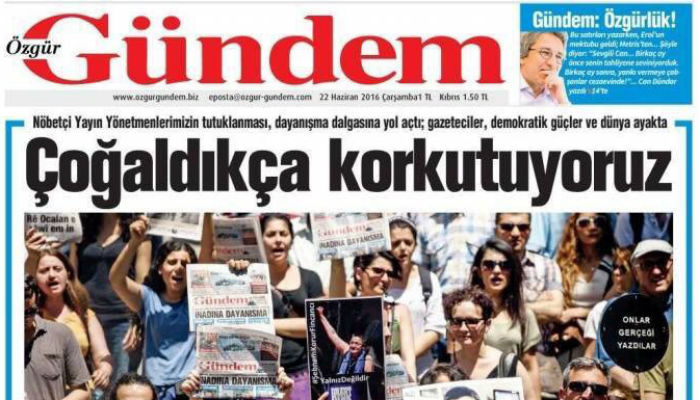 A regional appeals court in İstanbul has upheld jail sentences handed down to five journalists by a local court for alleged links to the outlawed Kurdistan Workers’ Party (PKK) in a trial involving the pro-Kurdish Özgür Gündem newspaper, the Mesopotamia news agency reported on Thursday.

The İstanbul Regional Appeals Court’s 3rd Criminal Chamber rejected the journalists’ petitions, claiming that the local court’s rulings adhered to the law and that the judicial process and evidence collection were carried out properly.

The journalists whose sentences have been upheld are Özgür Gündem editor-in-chief Hüseyin Akyol, who was given three years, nine months, and Ayşe Düzkan, Ragıp Duran, Hüseyin Bektaş and Mehmet Ali Çelebi, who were given 18 months each.

A Turkish court in August 2016 ordered the interim closure of Özgür Gündem for alleged links to the PKK, spreading “terrorist propaganda” on its behalf and waging a war against the state.

Özgür Gündem, along with 14 other media outlets, was shut down in a post-coup government decree on Oct. 29, 2016.

A group of intellectuals and press freedom activists conducted a campaign in solidarity with the daily, which was under heavy government pressure, between May 3 and Aug. 7, 2016. Prominent journalists and academics served as the “editor-in-chief on duty” for the newspaper, prompting Turkish prosecutors to launch investigations into 37 journalists, academics and activists.