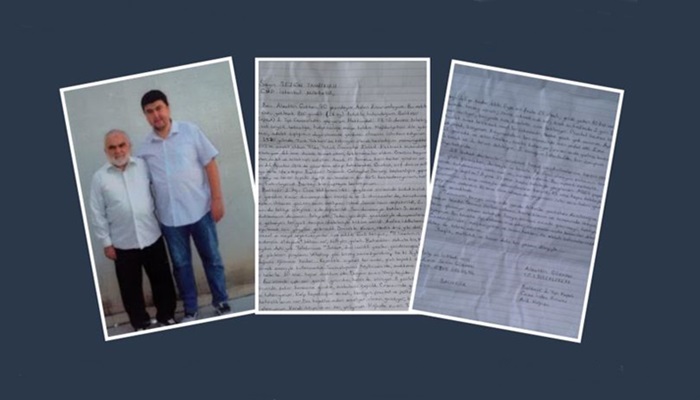 Seventy-year-old Alaattin Gökhan, who has been behind bars for 800 days due to alleged links to the Gülen movement, desperately calls for justice to be served in his case in a letter sent from prison, the tr724 news website reported.

Gökhan, who used to serve as the chairman of a local Gülen-linked foundation in the western province of Balıkesir, is one of the tens of thousands of people who have been sent to jail due to alleged Gülen links since the failed coup attempt.

In a letter he sent from the Balıkesir Kepsut Prison, Gökhan talks about his ordeal since his detention on Aug.16, 2016 and subsequent arrest. The elderly man, who is an engineer by profession and worked for the state for 41 years, was given a jail sentence of 10 years on charges of membership in a terrorist organization.

“I can’t tolerate accusations about terrorist organization membership and coup involvement. I am suffering every day here. I condemn whoever is behind the coup,” he writes in his letter.

Gökhan says he was subjected to a series of rights violations, acts of maltreatment and unlawfulness during his detention and trial. He said two prosecutors who demanded his release during the trial were replaced while a third prosecutor, who asked for the continuation of his imprisonment, remained in the trial.

The old man talks about the accusations of a secret witness against him and says the secret witness did not attend any of the hearings, citing health problems.

As for his detention, which lasted eight days, Gökhan says he went into a diabetic coma because he could not get his medication. According to his letter, the man suffers from a series of health problems and gets five medications every day.

He says his cardiac valve needs urgent treatment and that he needs to have knee surgery because he has difficulty walking.

“Everything is a problem here. It is very difficult to go to the infirmary. Hot water is given for three hours two days a week. There is always a long line to take a shower and use the toilet. Just imagine what kind of torture it is for a prostate patient to wait for a turn to use the toilet. It is also very cold in prison, I am shivering,” says the man, adding that 42 inmates are held in hisprison cell, which has a 28-person capacity, forcing some prisoners to sleep on the floor.

At the end of his letter, Gökhan voices his belief that justice will be served sooner or later in his case and that his innocence will be proven.

He is now waiting for the country’s Supreme Court of Appeals to make a ruling on his appeal, to stop the “murder of the law.”

Gökhan says due to his advanced age and health problems, he wants to wait for the conclusion of his appeals process at home, so is asking for his release from prison.

The European Commission said in a report on April 17 that since the introduction of a now-ended state of emergency on July 20, 2016, over 150,000 people were taken into custody and 78,000 were arrested on terrorism or coup charges.