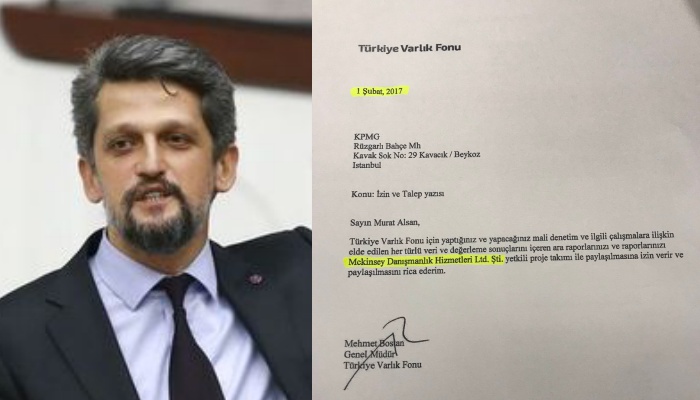 A report sent to members of the Planning and Budget Commission of the Turkish Parliament reveals that Turkey’s sovereign Wealth Fund launched cooperation with American consulting firm McKinsey & Company in February 2017, the Artıgerçek news website reported on Thursday.

The revelation came from Garo Paylan, Diyarbakır deputy from the Peoples’ Democratic Party (HDP) and a member of the commission, who tweeted a picture of one of the audit reports on the sovereign Wealth Fund distributed to members of the commission within the framework of budget talks in parliament.

The tweeted picture featured a document dated Feb. 1, 2017 allowing the sharing of all Wealth Fund-related financial data, analyses and reports with McKinsey and signed by Mehmet Bostan, former chairman of the Wealth Fund.

“Look what came out of the audit report that we have received in parliament! While the treasury minister said two months ago that they had decided to work with McKinsey and Erdoğan claimed they would not, they have been working with them since February 2017,” Paylan tweeted.

Paylan was referring to the announcement on Sept. 27 by Treasury and Finance Minister Berat Albayrak that Turkey had made a deal with McKinsey as part of the New Economic Program (NEP) adopted in order to facilitate recovery from economic problems as well as to the subsequent remarks of Turkish President Recep Tayyip Erdoğan on Oct. 7 denying any cooperation with the US firm.

“I told all my ministers: ‘You will not accept any advice or consultation from them.’ We do not need it,” Erdoğan had said.