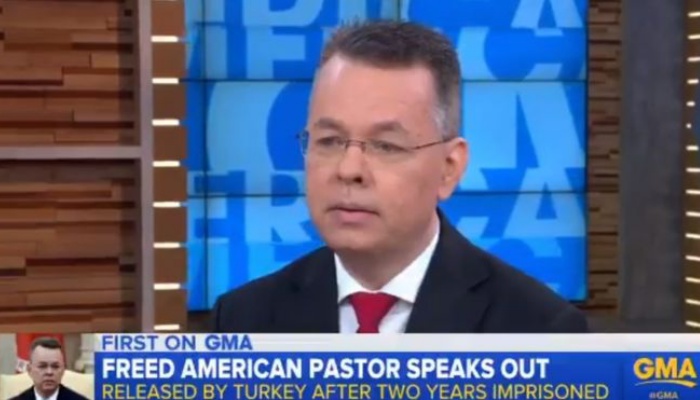 Andrew Brunson, the American pastor who was detained in Turkey for two years before his release on Friday, told ABC News on Tuesday that his incarceration in a Turkish prison was like “living in a mosque” due to his isolation by religion from other prisoners, who were all Muslim and accused of “terrorism” as sympathizers of the faith-based Gülen movement.

After being kept in solitary confinement for a number days, he was put in a cell meant for eight people along with more than 20 other prisoners. “I was very isolated, both by language and by culture, nationality, and also by religion. All the people I was with were very strong Muslims, they were all arrested as Muslim terrorists, as part of the Gülenist movement, and so it was like living in a mosque in many ways,” Brunson told George Stephanopoulos on “Good Morning America” on Tuesday.

“At this point I’m one of the most hated men in Turkey, probably,” Brunson also said, because of the Turkish government’s allegations that he committed espionage and was linked to terrorism, adding that he grew increasingly concerned about his physical safety given the accusations against him.

Brunson, 50, was a Christian evangelist in Turkey for 23 years before he was arrested in October 2016 and accused by the Turkish government of espionage and ties to terrorist groups. He and the US denied those charges.

“Our purpose in going to Turkey was to tell people about Jesus Christ. We did that very openly, and we were never involved in anything political,” Brunson told Stephanopoulos. He said he and his wife were shocked by their arrest, which was initially for deportation and subsequently for posing a “threat to national security.”

Prior to his release over the weekend, Brunson’s case had created a deep rift in US-Turkish relations, with the Trump administration heavily committed to securing his freedom and punishing its NATO ally with economic penalties for not doing so. An evangelical Christian pastor, he had also become a rallying cry for religious freedom advocates in the US.

The Turkish court sentenced him Friday to three years, one-and-a-half months, but given his time served and the fact that it was his first arrest, his house arrest and travel ban were lifted. He was flown out of the country that Friday on a US military aircraft, stopping in Germany for a medical evaluation before landing in Washington on Saturday. There, he met with President Trump in an Oval Office welcome celebration.

“The way I survived that was by just spending hours in prayer, just to keep my sanity,” Brunson said of his two-year detention in Turkey

After their 23 years in the country, “working… in obscurity,” he said he and his family still love Turkey.