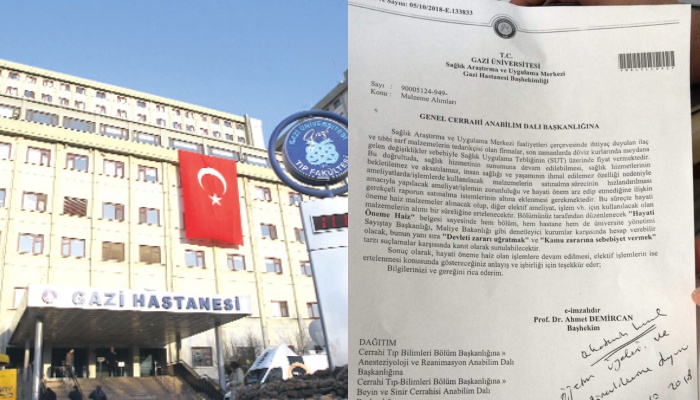 The loss in value of the Turkish lira in recent months is ringing the alarm bells of health services in Turkey, with a chief physician warning doctors not to perform elective surgeries or face accusations of “damaging the state.”

A directive signed by Prof. Dr. Ahmet Demircan, chief physician of Gazi University Hospital, was shared by journalist Bülent Mumay on Twitter. In the directive dated Oct. 5, 2018 Demircan underlines that suppliers have been demanding higher prices for medicine and medical equipment due to the recent currency crisis.

The Turkish lira has lost almost 50 percent of its value against the US dollar since the beginning of 2018.

Asking doctors to add documents showing the necessity of the surgery to their requests for surgical instruments, Demircan said the documents would be evidence against any accusation of “damaging the state” or “causing damage to the public.”

“I thank you for your understanding and cooperation in continuing vital operations and delaying elective surgeries,” Demircan said.

Gazi University announced in 2016 that they had provided treatment for more than 60,000 inpatients in one year.

Ege University Hospital in September asked patients not to request printed medical reports due to a sharp rise in the cost of paper.