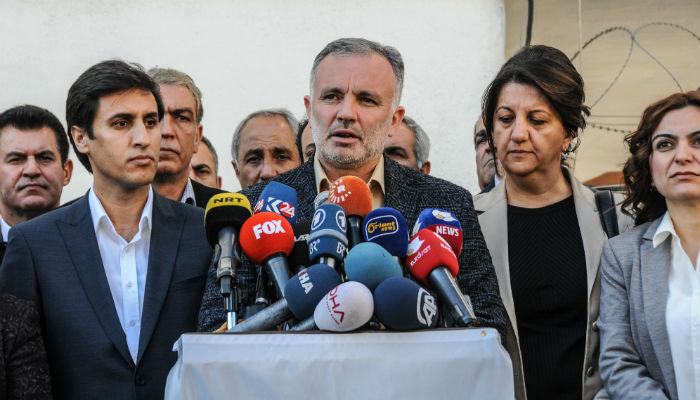 “If this is their approach, they can create an accreditation system and submit a list to us so that we can decide who we can put forward as a candidate by using their list,” HDP official Ayhan Bilgen said during a press conference in the parliament building.

“What was said yesterday was a declaration of the uselessness of Turkey’s Supreme Election Board [YSK], Constitution and Constitutional Court,” Bilgen added.

“The March elections are approaching. If candidates who are linked to terrorism win the elections, we will not wait for this or that reason. We will immediately do what is necessary by appointing trustees,” Erdoğan said during a meeting of his ruling Justice and Development Party (AKP) in the Kızılcahamam district of Ankara.

Accusing Erdoğan of “trying to create fear and intimidation to prevent a reflection of the will of the people in the elections,” Ayhan said: “Using a method other than accepting the people’s choice in elections and announcing it before the polls is an effort to render meaningless the ballot box, the elections and democracy.”

The Turkish government has appointed trustees to 94 of 102 municipalities run by the pro-Kurdish Democratic Regions Party (DBP) and the HDP and arrested 93 mayors and 81 council members across southern Turkey over alleged terrorism links since Sept. 11, 2016. More than 2,000 people have been dismissed by trustees from their municipal jobs.

The PKK, which has been waging a bloody war in Turkey’s Southeast for more than three decades, is listed as a terrorist organization by Turkey, the EU and the US.

Many HDP deputies including the party’s former co-chairpersons and local politicians are facing terror charges and are jailed due to an ongoing government crackdown on Kurdish politicians in the country.