The US will deliver two more F-35 fighter jets to Turkey in 2019, the Hürriyet Daily News reported, citing the military head of the F-35 program.

Speaking to reporters in Arlington, Virginia, on Monday, Vice Admiral Mat Winter, the F-35 program executive officer, said he expected the warplanes to be delivered in March.

Winter said he does not “see any indication of a change” in the delivery of Turkey’s 100 jets.

“The Pentagon must submit a report to Congress within 90 days of the 2019 Defense Authorization Act [NDAA] being enacted,” he added, referring to an amendment to the NDAA that prohibits F-35 sales to Turkey until the Pentagon issues a report to the US Congress on the “overall strategic relationship with Turkey,” all foreign weapons sales to Ankara and Turkey’s intended purchase of a Russian-made S-400 long-range air-defense system. The spending bill also calls on Turkey “to release wrongfully detained U.S. citizens including Andrew Brunson and Serkan Golge.”

Brunson is an evangelical pastor standing trial in Turkey on questionable charges of terrorism and espionage, while Gölge is a former NASA scientist convicted of membership in a “terrorist” organization, allegations denied by both.

The US government has demanded their release and has imposed sanctions on two Turkish Cabinet ministers and tariffs on Turkish metals imports toward that end.

Winter said his office has provided technical and programmatic information for the report and will submit it within 90 days.

The F-35, a stealth jet built by Lockheed Martin, is considered one of the most expensive pieces of US military equipment, with an average cost of around $100 million.

Turkey took delivery of its first two F-35 fighter jets in late June at a ceremony in Fort Worth, Texas.

Turkey has been a partner of the F-35 program since 1999. The Turkish defense industry has taken an active role in their production, including Alp Aviation, AYESAS, Kale Aviation, Kale Pratt  & Whitney and Turkish Aerospace Industries making parts for the first F-35 fighter jet.

A US Marine Corps F-35B crashed on Friday in Beaufort County, South Carolina, according to CNN. The pilot ejected safely, and the cause of the incident is under investigation. 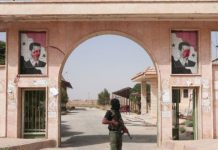