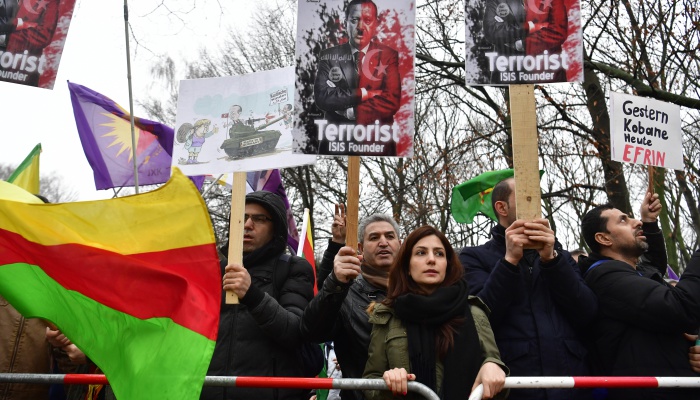 Germany’s large Kurdish community said Monday it had been banned by Berlin authorities from holding a rally at the Brandenburg Gate during a visit by Turkish President Recep Tayyip Erdoğan in late September.

Instead of gathering on Sept. 29 at the landmark symbol of German unity, the Kurds will now hold the rally a day earlier at the nearby Potsdamer Platz, on the day the Turkish leader arrives.

A Berlin police spokesman, Michael Gassen, stressed that the protest had not been outlawed but that the Brandenburg Gate was reserved for the celebration of German Unity Day on Oct. 3.

However, the Kurdish Community of Germany criticized the decision in an angry statement, claiming the “extensive security measures … significantly impede the freedom to demonstrate.”

Community leader Ali Ertan Toprak said the restriction marked a “dubious message on the part of the authorities to limit the rights of democrats for the benefit of a despot.”

Gassen, however, told AFP that “stages for the Oct. 3 festival will already be under construction” during Erdoğan’s visit and thus a demonstration there would not be possible.
“We asked the organizers to suggest another location but they cancelled” the protest, he added.

Germany has a million-strong Kurdish community, many of whom are of Turkish origin.

During the Sept. 27-29 visit, Erdoğan will hold talks with German political leaders in Berlin and open a mosque in Cologne, which has a large Turkish community.

Turkey’s largest ethnic minority are the Kurds, who have long complained of being denied their rights in the country.

The outlawed Kurdistan Workers’ Party (PKK) took up arms in 1984 in a bloody insurgency that has left tens of thousands dead.

Erdoğan in the first years of his rule took unprecedented steps towards giving the Kurds greater rights and opened talks with the PKK.

But a ceasefire unraveled in 2015 and violence continues, with still no peace deal in sight.