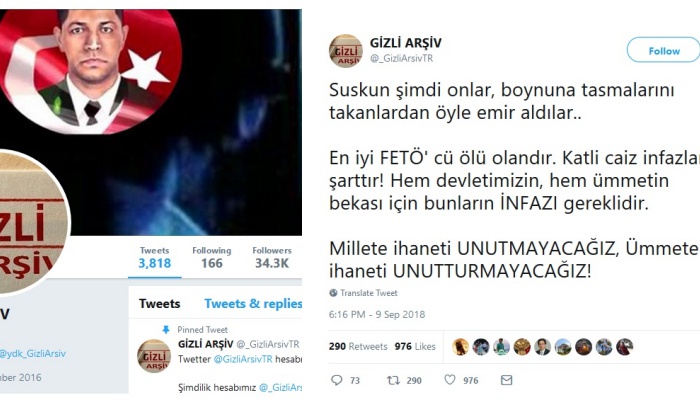 “The best FETÖ [a derogatory term coined by the government to refer to members of the Gülen movement] member is a dead one. Their murder is religiously permissible and a must. For the future of our state and our ummah, their executions are necessary,” @_GizliArsivTR, who has almost 35,000 followers, tweeted on Sunday.

Following President Erdoğan’s promise “to cut off traitors’ heads,” the pro-government media last year called for an Ottoman-like solution for the execution of people linked to the movement.

Sedat Peker, a convicted gang leader and staunch supporter of President Erdoğan, last year said they would hang all people linked to the Gülen movement from flagpoles and trees.

In a similar move last year, journalists Cem Küçük and Fuat Uğur, supporters of Erdoğan, made a call for the assassination of followers of the faith-based Gülen movement who are abroad, during a live broadcast on the TGRT news channel.

Erdoğan and his ruling Justice and Development Party (AKP) government pursued a crackdown on the movement following corruption operations in December 2013 in which the inner circle of the government and then-Prime Minister Erdoğan were implicated.

According to the TurkeyPurge.com website, with the latest decree the total number of people dismissed after the 2016 coup attempt now exceeds 140,000.

The European Commission said in a report on April 17 that since the introduction of a state of emergency on July 20, 2016, over 150,000 people have been taken into custody and 78,000 arrested.

Interior Minister Süleyman Soylu on Dec. 12, 2017 said 234,419 passports had been revoked as part of investigations into the Gülen movement since the failed coup.