European Parliament (EP) members have called on the Moldovan government to respect the rule of law and stop the deportation of seven Turkish teachers from a chain of private high schools who were detained by agents of the Moldovan intelligence services as part of the Turkish government’s global witch hunt against alleged members of the Gülen movement.

“Today early in the morning we were shocked to find out the detainment of these people by Moldovan intelligence officers on their way to their schools or from their house without any legal procedure, with the intention of illegal deportation without any trial or any contact with their lawyers, in violation of basic fundamental rights,” said the statement. 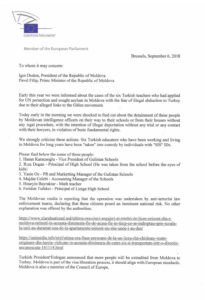 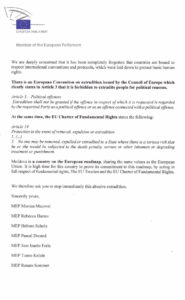 “[Seven] Turkish educators who have been working and living in Moldova for long years have been ‘taken’ into custody by individuals with ‘SIS’ IDs. Moldovan media is reporting that the operation was undertaken by anti-terrorist law enforcement teams, declaring that these citizens posed an imminent national risk. No other explanation was offered by the authorities.”

The MEPs added: “We are deeply concerned that it has been completely forgotten that countries are bound to respect international conventions and protocols, which were laid to protect basic human rights. There is a European Convention on extradition issued by the Council of Europe which clearly states in Article 3 that it is forbidden to extradite people for political reasons.

“Moldova is a country on the European roadmap, sharing the same values as the European Union. It is high time for this country to prove its commitment to this roadmap, by acting in full respect of fundamental rights, the EU Treaties and the EU Charter of Fundamental Rights. We, therefore, ask you to stop immediately this abusive extradition.”

Meanwhile, Johannes Hahn, the European commissioner for neighborhood policy and enlargement negotiations, said in a message posted on his official Twitter account, “Orizont teachers in #Moldova: I expect the #Moldovan government and all authorities to respect rule of law and all established judicial procedures.”